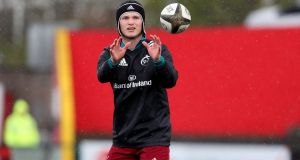 Tyler Bleyendaal: “He is a great man, a very good rugby player, he understands the game of rugby and we are very lucky to have him,” said Munster coach van Graan. Photograph: Dan Sheridan/Inpho

Tyler Bleyendaal made an immediate impression on Johann van Graan when the South African took over as head coach in Munster in November 2017 and nothing in the interim has done anything to diminish the esteem in which the New Zealand-born outhalf is held by both the coaching cadre and playing group.

On Saturday if, as anticipated, Joey Carbery’s hamstring precludes him from playing, van Graan will entrust the 28-year-old New Zealand-born and Irish -qualified Bleyendaal with the number 10 jersey, for Munster’s Heineken Champions Cup semi-final against Saracens at the Ricoh Arena in Coventry.

Bleyendaal’s injury profile is well documented, as is his courage and bravery, but what is less regularly referred to is his selflessness. Van Graan offered to fill in the blanks.

“His composure and his calmness impressed me straight away and Tyler is a very consistent guy, whether injured or not, he gives the same amount of input every week.

“He sits in on every meeting and he is just one of those guys in the team that is a real energy giver. He doesn’t say that much, but what he says has got some real value and he is a massive influence at Munster Rugby.

“There were a lot of questions asked as to why I re-signed him (on a new contract that will keep him at Munster until 2021) and it is specifically for weeks like this. He is a great man, a very good rugby player, he understands the game of rugby and I think we are very lucky to have him.”

Bleyendaal was parachuted into the Champions Cup quarter-final against Edinburgh at Murrayfield, following a first-half hamstring injury to Carbery, providing a pivotal input in securing victory, gobbling up an overthrown lineout and then kicking a magnificent touchline conversion to highlight two critical interventions.

He followed that up with a 65-minute outing against the Scarlets but van Graan wasn’t prepared to risk sending Bleyendaal to Treviso for a Pro14 game. JJ Hanrahan proved an accomplished deputy.

The Munster coach explained: “The reason I didn’t pick him against Benetton was if something happens again you’ve got to have another fly half available and I thought JJ really played well.”

It’s not just van Graan that recognises Bleyendaal’s wide-ranging contribution. Inside centre Rory Scannell has played alongside all four Munster outhalves this season, Carbery, Bleyendaal, Hanrahan and Bill Johnston and is perfectly placed to offer an insight into the disparate qualities.

He said: “They all have different strings to their bow really. Joey and JJ probably have that bit more of a running threat. Tyler will manage a game brilliantly for you and put you in the right places. Bill Johnston, when he’s had a chance, his kicking has been incredible, especially off the tee.”

Speaking specifically about Bleyendaal, Scannell continued: “He’s incredibly intelligent, one of these guys who could go straight into coaching if you asked him today.

“He’s very calm in the way he delivers his messages, even on the pitch when there are those tense moments. There might be a score in it in a big European match and he just sticks with the process, sticks to our game plan.

“He helps calm the guys around him as well and when you see that in your main playmaker it helps keep you calm as well. Having him alongside you is always a benefit and I try to be his ears and feed him the info. The last few games he’s been incredible, it’s great to see him back firing at his best since he’s had a few injuries.

“Even when he was injured he is in every meeting. He wants the team to get better. Most lads, when they’re injured, they’re pretty down and can’t help the team on the pitch. They try their best to help out, looking through clips and stuff, [but] the detail he brings there to younger guys has been a real help.”

Bleyendaal was Munster’s outhalf when they lost 26-10 to Saturday’s opponents Saracens in a semi-final at the Aviva Stadium but for van Graan, who wasn’t the coach at the time, there is less direct relevance to that result or the fact that the province is trying to end a sequence of six successive defeats at the penultimate stage of the tournament.

He admitted: “‘I’d love to say that it’s very important, we all want to get into a European final but our job for the weekend is this 80 minutes of rugby ahead. We can’t look at the past. We took what we could out of the two semi-final losses [Champions Cup and Pro14] last season.

“If we win on the weekend everybody will say that we’ve learned our lessons and if don’t then people will say, ‘Munster lost in another semi final’. Our only focus is what do we do through the week and how do we handle Saracens on Saturday afternoon.”