Availability of of Sexton, Toner, Furlong, Henshaw and O’Brien a major fillip for champions 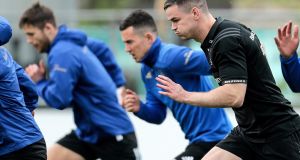 Johnny Sexton: back in full training for Leinster’s showdown with Toulouse at the Aviva. Photograph: Laszlo Geczo/Inpho

When Warren Gatland chose to omit Brian O’Driscoll from the third Lions Test in Australia six years ago, he maintained that experience was overrated.

Such is Stuart Lancaster’s renowned ability to develop young players and back them for big games, you’d venture he’d be of like mind, but the Leinster head coach also knows the value of experience for games such as Sunday’s Heineken Champions Cup semi-final against Toulouse at the Aviva Stadium.

Two seasons ago injuries denied Leinster the services of Rob Kearney, Jamie Heaslip, Sean O’Brien and Dave Kearney, as well as Cian Healy through suspension, for the 27-22 semi-final defeat by Clermont in Lyon.

Last season, Kearney was back at fullback, as was Healy, while Scott Fardy had arrived, James Ryan had emerged and with O’Brien again sidelined, Jordi Murphy was at number eight, as Leinster beat the Scarlets 38-16.

The return of Devin Toner and Robbie Henshaw for last Saturday’s defeat at home by Glasgow was augmented by O’Brien also coming through what Lancaster described as another good run-out for the flanker.

“I thought he got better as the game went on as well. I think he grew into the game.”

With Johnny Sexton also back in full training, and Tadhg Furlong expected to be available for selection after his knee injury against Glasgow, Lancaster took comfort from the presence of so much experience at the start of their biggest week of the season to date.

“There’s an experience about the group when you’re looking around the room this morning that will help us to prepare for what’s going to be a fantastic game of rugby, but against a high-quality team, who we’ve got huge respect for.”

Sexton last played for Leinster in the tetchy December defeat by Munster, and his last outing was Ireland’s comprehensive loss away to Wales, but the province’s all-time leading points scorer, captain and talisman recovered from his quad issue to train at the end of last week.

“We trained Thursday and we had a non-23 session on Friday when we had about 20 players because we rested quite a few for the Glasgow game. It was a bit of a ‘Stuesday’ on a Friday and he survived,” said a smiling Lancaster, in reference to the training day moniker the players named in his honour.

Lancaster added that Sexton is “very much in leadership mode” and while Ireland’s anti-climactic Six Nations represented a different challenge from coming off last season’s Grand Slam “there’s more than enough belief in the players and the coaching group that we can deliver the performance. But we’re by no means complacent”.

There’s a view out there that Leinster haven’t hit their best form this season in Europe, yet here they are again with a home semi-final after scoring the most tries in the pool stages.

“I think people’s memories are reasonably short because the Wasps game we played some outstanding rugby, I thought,” ventured Lancaster. “The first game was probably our best performance of the season.”

“Then we went to Toulouse and I think the disappointing thing about that performance was we gave them such an early lead, got back to 27-21, and ultimately lost 28-27 on the intercept. Of the two Bath games, the one at Bath was tough on the back of the November internationals, but we played well at the Aviva to beat them by 40 odd points. We beat Toulouse at home and then put 40 points on Wasps away from home.

“The Ulster game is the most recent game on people’s minds and Ulster’s results recently, particularly last weekend, gives you an idea of how good we felt Ulster were going into it and how well Ulster played on that particular game.

“So, yeah, it’s a completely different scenario from last year. We’re the champions, we’re the hunted rather than the hunters and that makes the difference. But we’re confident in our ability to turn it on for a big game. We’ll need to this week.”

Toulouse responded to their defeat by Leinster at the RDS in January by winning their next six matches, including their comeback with 14 men for the last hour away to Racing in the quarter-finals.

The Top 14 leaders’ only other defeat in their last 23 matches was a fortnight ago against a fired-up Toulon in Marseilles, when Ugo Mola opted for a largely second string team, before reinstating many of this front-liners for last Sunday’s 47-44 comeback win over Clermont.

“You only have to look at their track record of results since we played them in The RDS,” said Lancaster.

“They’ve won consistently since then, other than Toulon, when they sent pretty much their second string out for that. Even the weekend game against Clermont, to come back from 44-33 down with ten to go and win it 47-44; the quarter-final against Racing, down to 14 men with 60 to go and won away from home. So it’s a proper challenge.”

Ticket sales have topped 40,000, with 600 or so from Toulouse, as the Easter Bank Holiday is liable to limit the attendance to no more than 45,000.