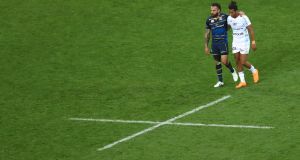 With four exciting matches featuring the form club teams in Europe, the Champions Cup quarter-finals weekend is my favourite in the club rugby season.

As if by osmosis, American cultural tyranny has seeped into our sporting lexicon, so now the clubs playing this weekend have been rewarded for a successful pool stage by making “the play-offs”.

They have qualified for a new competition of a much higher standard than the pool stages.

Whatever you call it – the pointy end of the season, the big dance, or the money games – all the teams are now in immediate elimination territory.

To be successful in sudden death rugby there are unwritten truths. “Lore” passed down through the generations by the wisdom born of joyous victory, and the pain of bitter defeat.

The most basic of these truths is that in big matches you need your great players to play great. As we all witnessed in the recent Six Nations, Ireland’s great players – Rory Best, Jonny Sexton, Tadhg Furlong and Conor Murray – were out of form.

On Ireland’s two biggest days of this year’s championship against England and Wales, which were effectively knock-out games, our great players did not perform and the English and Welsh greats did. It was that simple.

Some of that bad form was also in the area of tactical decision making. During the Six Nations we constantly witnessed teams declining very kickable penalties and instead going to the corner for an attacking lineout maul. Statistically this was disastrous leadership, as there were 59 lineouts in the opposition 22, from which only three maul tries were scored.

The great Welsh-born Australian Rugby League fullback of the 1950s and 1960s, Keith Barnes, was such a prolific goal kicker he was known as “Golden Boots”.

I had the pleasure of talking rugby to him many years ago. He had a very simple “mantra” for big matches.

“Take the points when they are on offer. You never know how important those points will be at the end of a match.”

We have two glaring recent examples of failure to do this. England were 31-7 up against Scotland, with a bonus point already in the bag and they declined a penalty shot at goal in preference for the maul and failed. We all know how that turned out.

Ireland were behind by only 10 points against Wales and turned down a very kickable penalty against the best defensive team in the northern hemisphere. They kicked for the corner and their maul was turned over. Why not take the three points? Ireland still had to score twice.

It was poor preparation from the staff and poor on-field game management. Wales remained two or more scores ahead for the entire match.

This weekend, it is essential teams take the points and apply scoreboard pressure on their opposition.

Which brings us to the lore that states: “Defence wins play-off games.” For Munster this is especially true. In away play-off games in recent years, it has been their below par defensive performances that have cost them.

As away teams, Munster, Ulster and Connacht must defend with an intensity that will silence the home supporters and place doubt into the minds of their opponents.

Defence starts with body language. Each individual must adopt an aggressive upright stance that says to the attack: “we are not intimidated in your stadium and we are hunting you as a pack.”

Combine this with dramatic line speed and powerful communication across the “D” line, with each individual physically yelling the name of the player that he is planning to tackle. By doing this the defending team can turn the wave of home team support into a wave of pressure, one that swings the momentum behind the siege mentality of the away team.

Gaining momentum in elimination games is massive. The biggest negative “momentum swingers” are errors that give away possession or territory or both.

So the final piece of lore is: “In big games, the team that makes the least amount of mistakes wins.”

Cast your mind back to last year’s final in Bilbao. In the Spanish rain the game was an arm wrestle. At about the 65-minute mark I remarked that a “young man is about to make an error that he will regret for the rest of his life”.

Moments later Teddy Thomas gained possession in his own 22 with Leinster pressure coming. Unbelievably, he decided to run and not kick. He was driven into touch, giving Leinster an attacking lineout. In the following play Leinster were awarded a penalty. Isa Nacewa kicked the three points and delivered Leinster the cup.

To win, the game must be played as far away from your own goal posts as possible, while showing the referee a picture of angelic discipline similar to that of a member of the Vienna Boys’ Choir. Penalties of any description must be kept to a minimum.

Those that follow the “lore” of the play-offs will have a celebration to look forward to, those that don’t will have a team meeting on Monday.

It was ever thus.