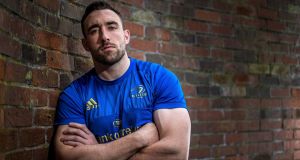 Jack Conan: “I think I have an extra point to prove this weekend because I didn’t feature in a lot of those big games in the latter part of last year.” Photograph: Laszlo Geczo/Inpho

The Leinster back row has become a dangerous place to be. You want 80 minutes and you want back-to-back games, says Jack Conan. As a professional it seems not a lot to ask.

But anything falling short of that competitive head space and a player might quickly find himself rummaging around with a dystopian view of the landscape. Conan knows that.

“I’m not in the frame of mind to have self pity on myself to think ‘Aw I should be playing more,’” he says. “I wouldn’t say I feel hard done by. Everyone wants to be involved and play in every game. But there are no mugs there.”

For Leinster and Ireland it has always been a question of to play or not to play. And in the run in to Ulster this week the number eight has only the Six Nations to gauge where he fits into Leo Cullen’s thinking.

The kink is a fit Sean O’Brien and his untypically unimpressive return to play with Ireland, how Dan Leavy has emerged from his lingering calf injury, leader Rhys Ruddock and Max Deegan’s eye-catching showing against Edinburgh. Never mind the Leinster emigre Jordi Murphy and the intel he will bring with Ulster to the Aviva on Saturday.

Conan can be pleased about his shifts with Ireland. He brought line speed, tempo and impact and has emerged satisfied with nailed down contributions, playing in three of the Irish games, starting in one and a replacement in two.

“I played the most amounts of minutes I had ever played in the Six Nations,” he says. “I played in two wins and one loss. I was covering six and eight from the bench and I was fortunate enough to come on at eight both times which is a bit more natural.

“I am able to do the six as well and I had that ticked off. Just making sure I was fitting in and showing Joe [Schmidt] that I could do the job and add to the team, bringing energy and getting on the ball and bringing line speed in defence.

“So there is no time to come in and rest on laurels and feel bad for yourself about everything that has happened outside of these walls in the last few months. We know that these lads are going to come down the road on Saturday afternoon and they are going to be the best version of themselves because they are up against the European champions.”

There appears to be an energised lease of life in the number eight and blindside, or at least ambition that appears to be bubbling. The irony is that it was the 26-year-old who had to watch most of the tail-end of last season as Leinster ripped through everyone to become champions. Conan was injured, coming back from injury, looking for form, offered bit-parts and fell between some cracks.

Leinster chose Murphy to finish out the European campaign as the starting number eight. Conan came on in the semi-final for Dan Leavy after 66 minutes. In the final against Racing 92, Murphy again started with Conan replacing him after 66 minutes. The irony? It was Murphy who was coaxed to move away north to Belfast.

Conan won’t say it, but in the eternal dog fight of the Leinster back row that was a result for him.

“I wasn’t playing great rugby at the time,” he says. “I had just come back from an injury. I was lucky to be involved in that semi-final and the final. I don’t think anyone would have looked at that and said ‘Oh he deserves to be in there’.

“It was disappointing for me not to feature but I think I rectified that by the end of the season getting the start for the [Pro 14] semi and the final and then obviously going on to win the PRO14 with the lads.

“Jordi, to be fair, is a top performer and he was class in those big games for us, especially in the quarter, semi and final of Europe. It brought it all back to me, how disappointing it is when you are not in the position that you want to be in and you are watching your mates go out there and you are not given the opportunity.

“So I think I have an extra point to prove this weekend because I didn’t feature in a lot of those big games in the latter part of last year.”

That’s enough of a motivation with a possible South Africa-born Marcel Coetzee, New Zealand-born Sean Reidy and Barcelona-born Murphy staring down the backrow barrel on Saturday.

If you were Joe Schmidt, you would have to love that moxie.