Chris Farrell fired up for one of his biggest ever games 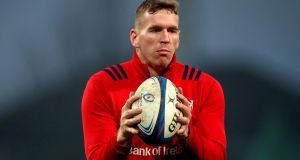 Chris Farrell: “It’s a massive game. It’s where we want to be. It’s going to be really exciting.” Photograph: Bryan Keane/Inpho

When you think of it, outside of his five Test appearances for Ireland, this Saturday’s Champions Cup quarter-final against Edinburgh in Murrayfield is the biggest club or provincial game of Chris Farrell’s career.

At 26, he has taken the circuitous road from Fivemiletown in Tyrone to here, but in five games for Ulster, 74 for Grenoble and 20 for Munster, this will be his first quarter-final in Europe’s premier competition after missing out on last season’s knockout stage through injury.

“Massive yeah,” is how he describes it, his smile revealing how much he is looking forward to the occasion. “It’s a massive game. It’s where we want to be. It’s going to be really exciting.”

Farrell has earned this chance and how. Having been a star turn in helping Campbell College to the Ulster Schools Senior Cup in 2011, his time at Ulster could have broken lesser men. A torn anterior cruciate ligament sidelined him for nine months and a broken metatarsal soon after his return kept him out for a further six months.

Joining Grenoble and making a success of his time there demonstrated his ability to adapt to different environments and cultures. Hence, it’s been no surprise that he has settled so well at Munster, nor that he again responded so impressively to a lengthy enforced absence from March to November with a knee injury.

His strong carrying gives Munster a focal point for their running game, but he also brings deft passing and offloading.

In seven outings for Munster this season, as well as two for Ireland, Farrell has been on the winning side every time, and his attacking threat was seen at its best in the 41-15 win away to Gloucester in January.

After starting in Ireland’s wins over Scotland and Italy, Farrell should be the better for his transformative, 35 minute run-out against Zebre, although he admits making the transition is not without its problems.

“It is a real issue, I think. I came in during the middle of the Six Nations for one game against the Kings and throughout that week of training I found myself mixing up calls and not being as sharp as I should have been or I would like to have been in a normal game.

“I recognised that straight away and I said it to a lot of the lads up in Ireland camp when I went straight back up that weekend, and I spoke to Johann about it. I said we really need to sharpen up on our ability to be mentally switched on and to know the calls as quickly and as sharply as you normally would because it actually is a real issue coming back in from camp, that you need to sharpen up on. Because we recognised that in the middle of the Six Nations, I think it shouldn’t be an issue this week.”

Farrell was speaking after the squad’s Monday morning debrief beforehand in the same room, and had already felt a tingle of expectation.

“There is a real vibe when you come into the auditorium in a Heineken Cup week or a Champions Cup week and having the other lads back, Pete, Earlsie, leaders, that probably creates a little bit of expectation that they’re back in the room. Their presence is felt. It happens very naturally.”

Farrell is under no illusions, however, as to how tough a nut to crack Edinburgh will be.

“They’re a really good side and they’ve proved that this season, they got out of their pool they’ve topped the pool with points to spare and if you beat two top French teams like Toulon and Montpellier you have got to be strong.

“Defensively we’ve got to be well-structured. They’ve built this resilience that is one of the main words I would use for them; how they’ve come from the last few seasons they’ve got this resilience now where they don’t give up and they fight for every single inch. They’re a quality side.”

Munster came up short in their target of a home quarter-final, but at least an away tie in Murrayfield will facilitate as many of the Red Army as want to be there.

“There are an awful lot of Irish people over in Scotland and Edinburgh. You look back at the pool games and the game in Gloucester that we played, the amount of support that we had in that game was unbelievable.