Leinster ready to take derby day honours at the Aviva 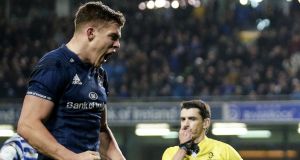 What’s seldom is usually wonderful. To put this quarter-final in context, it will be only the fifth all-Irish derby in the 24-year history of the Heineken Champions Cup. If nothing else, then, it guarantees Irish participation in the semi-finals for the 10th time in the last 11 years and 18th time overall.

It should be feverish in the Aviva, and the teatime capacity is expected to see 13,000-15,000 away fans in attendance. They will travel in hope, not least after the talismanic Iain Henderson was passed fit along with other injury doubts such as Darren Cave, who starts instead of the injured Will Addison. Michael Lowry’s selection at full-back is a signal of attacking intent, while Luke Marshall is named amongst the replacements having been sidelined since May with an ACL injury.

By contrast, Johnny Sexton (leg muscle injury) is out, albeit Ross Byrne started the handsome January wins over Toulouse and Wasps. Scott Fardy starts, with Jamison Gibson-Park on the bench, so James Lowe’s undoubted X factor has been sacrificed, while a back three of Dave Kearney, Adam Byrne and Jordan Larmour means the latter’s finishing and broken field running have been preferred at full-back to Rob Kearney. He’s on the bench, where Ed Byrne has again been preferred to the Ulster-bound Lion Jack McGrath.

“It’s going to be a fantastic occasion and it’s amazing it hasn’t happened more often,” said Leo Cullen of this derby. “We are very, very wary because of some of the threats that they have,” he added, citing the ability of Jacob Stockdale and others to produce big plays, or Marcel Coetzee at the breakdown “if we allow him into the space or if the referee is not entirely vigilant if he’s got his elbows on the ground. We need to get a lot right for us to have chance of winning the game.”

There’s a theory about that Leinster’s A team haven’t found their A game this season, but they’ve still scored the most points (204) and tries (27) in the tournament. At home they’ve overwhelmed Wasps, Bath and Toulouse, which remains the latter’s only defeat in their last 20 matches.

Either way, an Irish-French semi-final will be completed by Sunday’s Racing-Toulouse tie in the Défense Arena, where Racing’s games have averaged almost 60 points. Saturday’s winners would be away to Racing in the Défense Arena or at home to Toulouse in the Aviva.

The odds and statistics in favour of Leinster on Saturday are heavy. They have won their last six home quarter-finals, and pitching up two weeks after the Six Nations didn’t seem to discommode them when thrashing Wasps and Saracens in the last two campaigns, albeit off the highs of beating England.

This is something of a free hit for Ulster, and they’ll have a go if possible

But this is a fresh page for the nine-strong Irish contingent from Cardiff, and the champions have plenty of players with a point to prove – such as Cronin, Ruddock, Seán O’Brien, McGrath and others.

This is something of a free hit for them, and they’ll have a go if possible. Best’s modus operandi is: if in doubt, go to the corner. They have their carriers in Henderson, who has been outstanding in Europe, Coetzee and Stuart McCloskey. Billy Burns, who had the most try assists in the pool stages with five, of which three were kick passes, will use his devilish kicking game, and Stockdale will be given licence to counterattack with the academy pair of Lowry and Rob Baloucoune.

But Addison is a huge loss and they look a little patched-up, so it would be no surprise if Leinster do unto Ulster what they did to Toulouse, ie dominate possession through the quality of their carrying and recycling, and ultimately pull clear through the firepower of Garry Ringrose, Larmour et al.

While Ulster famously stormed the Thomond Park fortress in 2012 at this stage, and have won their only two previous European ties in this stadium (the 1999 final against Colomiers and the 2012 semi-final against Edinburgh), their last win against Leinster in Dublin was six years ago, admittedly to the day. It remains their only win over the blues in this city in the last 20 years.