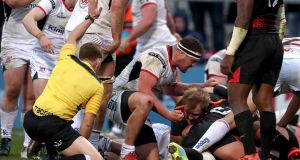 The mood should have been more upbeat, after Ulster’s fourth straight PRO14 win had moved them above Benetton Rugby to take ownership of second in Conference B, but then the potentially damaging casualty list saw to that.

And ahead of this weekend’s trip to the Aviva Stadium for the rather formidable-looking challenge awaiting from their Champions Cup quarter-final showdown with Leinster, the last thing Dan McFarland needed was to see Louis Ludik, Darren Cave and Marty Moore all leave the field early in last Saturday evening’s expected bonus point defeat of the Southern Kings.

Throw in the uncertainty surrounding Will Addison’s chances of featuring due to his back issue, the 26-year-old has not been seen in an Ulster shirt since January, as well as recent addition to the European squad James Hume being already out with a fractured ankle and McFarland is looking a bit short for someone to partner Stuart McCloskey in midfield.

So even though last weekend’s game turned out to be Ulster’s third consecutive bonus point victory, the sight of Ludik being helped off early on after shipping some form of leg or knee injury clearly makes him a major doubt for the province’s first taste of knockout rugby in Europe for five years.

Prop Marty Moore also followed with what was thought to be a possible HIA before Cave had to leave in the second half after taking a heavy shot to the ribs.

Even though Cave looked more likely to make it than Ludik, it meant that McFarland threw in Luke Marshall’s name as a possible outside centre contender for Saturday, after his recent addition to the European squad, though this would be anything but ideal as the 28-year-old has not had any game-time since last May after requiring surgery for a torn ACL.

“We will have to assess the injuries and see how Louis is and how Darren is. Obviously James Hume is out. We’ll have a look at Lukey and see how he’s going on,” said McFarland.

One player who will definitely be missing is on-loan Ian Nagle, the Leinster lock not being allowed to go up against the province who made him available to Ulster in the first place.

All this and Iain Henderson is by no means a certainty to have recovered from his knee problem by the weekend.

At least Marcell Coetzee came through his first outing since January reasonably well, even scoring a try against his fellow countrymen while Rory Best, Jacob Stockdale and Jordi Murphy are all expected to play in the quarter-final.

“It was great to see him back out there and at his bullish self,” said McFarland of Coetzee’s impact before addressing the task which awaits his squad on Saturday.

“Apart from the potential for the injuries we will be in a good place going into the weekend,” he insisted. “We haven’t strung together a really good 80 minutes yet, though perhaps in the Champions Cup we played a couple of really good games.

“But in order to win at the weekend we will to [have to do 80 minutes]. There is literally no doubt about that. We will have to be at our best.”

After tries from McCloskey, Rob Lyttle and Coetzee had put the home side 21-12 ahead at half-time, Robert Baloucoune secured the bonus point on 48 minutes.

John Andrew scored Ulster’s fifth late on after the simultaneous departures of Tertius Kruger, who was red-carded and Alandre Van Rooyen who was shown yellow.