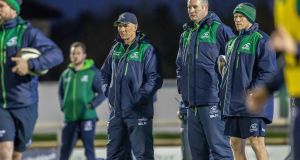 Historical precedence would perhaps point to a home win when Connacht travel to the AJ Bell Stadium for this evening’s Challenge Cup quarter-final (7.45pm).

Not only does Steve Diamond’s Sale enjoy home advantage, but they also boast a 5:1 winning record against Connacht in this European competition. Add in Connacht’s recent poor record in getting past the knock-out stages, and few would bet against the Irish province exiting the tournament.

However, under coach Andy Friend this season, Connacht have enjoyed confounding statistics, including that 20-18 victory against the English Premiership outfit in the Sportsground in January, having suffered a first leg loss in Manchester by 34-13.

Although Connacht completed the pool stages with one more win than Sale, they finished level on championship points, with Diamond’s outfit scoring two extra try bonus points. It is that ability to score – some 196 to Connacht’s 146 points – which is a clear indication of the Premiership outfit’s potency in attack.

Twice winners of this competition, Sale are currently sixth in the Premiership, having accounted for Saracens recently, all indications, says Friend, of a challenging task ahead.

“The Sale squad doesn’t seem to change much but they are at home, so it’s a big night for them. They are former winners, a quality side, and we saw that in both games. They also have knocked off some big teams, including Saracens, in the Premiership.”

Both clubs have made a handful of changes for this evening’s fixture.

The big talking point in Diamond’s selection is the absence of scoring machine Chris Ashton, Europe’s top try scorer, who bagged a hat-trick against Connacht at the AJ Bell in October. Also missing is Australian James O’Connor, but game manager Faf De Klerk will continue to pull the strings at halfback.

Interestingly former Connacht outhalf AJ MacGinty, who was ruled out of the October fixture following shoulder surgery, starts at No 10.

Connacht make six changes from the team that started in the Sportsground. Tiernan O’Halloran’s knock in last weekend’s bruising win over Benetton has ruled him out, giving Darragh Leader the change to take the reins at fullback. Niyi Adeolokun makes a first start in the competition this year, after recovering from a bicep injury suffered in November, with Cian Kelleher returning to duty on the right wing.

Bundee Aki is back from international duty to rejoin Kyle Godwin in midfield, with Ireland’s in-form outhalf Jack Carty making his first start since his making his international appearance, alongside the experienced Kieran Marmion.

Friend has also selected bench props, Peter McCabe and Dominic Robertson-McCoy, in the front row to join Tom McCartney, who takes over the captaincy in the absence of Jarrad Butler.

With Quinn Roux ruled out, Gavin Thornbury, back from injury, partners lock James Cannon, while in the back row Eoghan Masterson and James Connolly, who played in the October defeat, get another opportunity against the English Premiership side, with 22-years-old Paul Boyle at No 8.

There are risks in making changes to Connacht’s tried and tested players, which Friend acknowledges, but he is looking ahead to a possible nine remaining fixtures – if all goes according to plan.

“It comes with a touch of risk, but at the same time is one of optimism. I am really pleased with the way players have stepped up when given opportunities, and we haven’t been let down this year. It keeps the whole squad engaged which is really important. This is a full squad season.”

Already Friend has used 47 players over the course of both PRO14 and Europe, and he believes his squad has changed for the better since the October defeat.

“We are playing with a lot more confidence, our line speed is better, accuracy in collision in attack and defence is better as we have grown as a group.

“We want to be competing in both competitions, the PRO14 and Europe, so we have to keep both of those dreams alive and keep pushing for both.”

Connacht have never shied away from challenges, but Friend is hoping the improvement in accuracy, and potency in both attack and defence, will be reflected on the scoreboard.

Sale will certainly provide a measure of that continued growth at a critical juncture in the season.