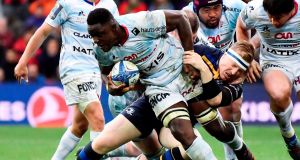 Louis Dupichot
Mixed under the high ball. Survived a HIA after a clash of heads with Henshaw and spurned a late chance by kicking straight at Ringrose on a rare occasion Leinster were stretched with no cover. Rating: 5

Teddy Thomas
Flickered sporadically in the first half but spent most of the game on the periphery. Wasted a lineout turnover by running back into trouble on 76 minutes - providing the platform for Leinster’s winning penalty. Rating: 5

Virimi Vakatawa
Carried with typical thrust but was largely stymied by the Leinster defence. Did some of his best work off the ball, including a crucial bit of cover in the first half after Dupichot spilled a Sexton garryowen. Rating: 6

Henry Chavancy
Like Vakatawa he carried honestly but couldn’t provide the silk to release his big midfield partner. Part of a huge defensive effort which kept Leinster at bay comfortably enough. Rating: 6

Marc Andreu
Spent much of the first half a spectator, and didn’t have the chance to really test Larmour - that said, the 20-year-old didn’t have a sniff against the Racing 11. Shaky under the high ball at times. Rating: 5

Pat Lambie
Made a smart break in the game’s embryonic stages and paid the price, injuring his knee as he stepped into contact and being forced off inside three minutes. Rating: N/A

Teddy Iribaren
Any fears Maxime Machenaud’s absence would be detrimental to Racing’s chances were quickly dispelled. Guilty of a few errors but largely controlled the game with aplomb and kicked well both from the base and from the tee. Rating: 8

Eddy Ben Arous
Picked for his dynamism he was a constant presence at the breakdown throughout his 54 minutes. Racing only had one scrum in the 80 minutes so any set-piece weakness wasn’t properly examined. Rating: 6

Camille Chat
A ferocious presence on the floor, Racing’s hooker was a key in slowing Leinster down at rucktime and he made 11 tackles. There were some standout turnovers - including pilfering Leavy on 33 minutes. Rating: 7

Cedate Gomes Sa
Like Ben Arous his mobility around the park was important for Racing, with little chance to make his mark at scrum time. Made a couple of booming carries as Racing started brightly in the second half. Rating: 6

Donnacha Ryan
A typically admirable performance from the former Ireland and Munster lock. He was a constant threat at the lineout and did a huge amount of donkey work both sides of the ball. Rating: 7

Leone Nakarawa
Won five lineouts and made 13 carries but Leinster managed to stop his dangerous offloading game. The EPCR player of the year was lucky to escape a first half sin-binning for a deliberate knock-on - and he knew it. Rating: 6

Wenceslas Lauret
A huge effort - Lauret made 12 carries and a topped Racing’s tackle chart with 15. Racing’s backrow consistently denied Leinster quick ball and he was a key part of that. Rating: 8

Bernard Le Roux
Racing started the second half brightly and so did Le Roux, carrying hard and showing delicate hands to keep the ball alive as Parisians ran 20 phases. Fronted up in defence with 14 tackles. Rating: 7

Yannick Nyanga (capt).
A captain’s performance - he marshalled his pack superbly as Racing dragged Leinster into the trenches. Carried 13 times for 66 metres and was typically slick in the lineout. Rating: 8

Bench
Rémi Talès was called into action far earlier than anticipated, and while he had a solid game his contribution will be remembered for giving away the match-winning penalty after straying offside, followed by missing a last-gasp drop goal. Rating: 5

Coach
Laurents Labit and Travers sent their team out to slow Leinster down and it nearly worked, with discipline just failing them at the death. There was a lack of a plan B but they nearly pulled it off regardless. Rating: 7