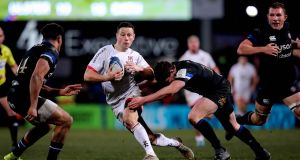 John Cooney in action for Ulster against Freddie Burns of Bath during the Champions Cup game at the Kingspan Stadium in Belfast in January. Photograph: Ryan Byrne/Inpho

It’s always worth stressing that there are far, far bigger issues in the country and the planet this year than the form of a rugby player. But of all the players who was surfing the wave before lockdown, none would have found the hiatus more ill-timed than John Cooney.

No player had become a more regular match-winner than the Ulster scrumhalf, who had scored 165 points, including nine tries, in his 14 starts for the province a stunning strike rate for a ‘9’.

In the process, he had bridged a near one-year gap to rescale the Irish scrumhalf pecking order behind Conor Murray, coming on as a replacement in all three of Ireland’s 2020 Six Nations games.

Cooney was at the peak of his powers, on top of his game and with that knack of seizing the moment in a way that only very few can do. Now, having turned 30 in May, it’s always as if he has to do it all over again.

“I’d be lying if I said I don’t feel the pressure coming back after playing well last season,” he said at the Canterbury launch of the new Ireland jerseys. “It’s obviously not ideal timing for me in terms of my body. I never felt as good. I didn’t have one niggle. To even do kind of rehab before training, which is annoying, but I felt amazing on the back of 12 or 13 games but it is what it is.”

Cooney has always placed great store in mental preparation, a tool which would seem particularly useful from Sunday onwards, when Ulster resume their 2019-20 Pro14 campaign against Connacht.

“It’s just about going back to what I was doing last season to get me in those scenarios, whether it’s recovery, what I do outside of rugby. I feel, for me, everyone can go to training every day and get the most out of training but it’s what you’re doing outside of that environment and that could be just enjoying your own space or learning while you’re out of there.

“I have a big onus on learning from individuals and other athletes. So I’ve tried to learn from them as much as I can, whether it’s basketball or even Hugh Jackman at the moment, listening to podcasts from him because I think there’s just a blueprint with these people and they do things successfully.

“Even now I get up an hour before I start every day just to take a bit of time to myself. I do certain things that I do that kind of makes my day better and that will have an effect on my rugby. It’s making sure I stay on top of things and that’s probably something I’ve taken from this, probably to have a bit more me time and as happy as you are off the field that’s going to resonate on the field.”

Aside from Jackman, ever since Cooney dislocated his shoulder in the 2016 Pro 12 Grand Final when playing for Connacht in their win over Leinster, he has been “a massive Kobe Bryant fan – just his mentality and how he got after everything. I took a lot from him”.

“Even last year I missed a kick against Bath, a very easy kick in front of the posts, and Kobe Bryant talks about when he misses his shot, going back to the arena and you take it over and over again and you change the outcome. That’s exactly what I did after that kick. I think I kicked it 12 times in a row and I got it every time. For me, it left me ready to park it and then move on to the next game.”

Cooney’s emphasis on mental preparation was also something he applied to daily life during lockdown.

“There is massive change in everyone’s lives at the moment and I have an interest in psychology. It is interesting when you are talking to other people and trying to train alone and you feel bad if, say, you get to five o’clock and you haven’t done your watt bike yet.

“I just realised that everyone was in the same boat and had the same feelings. I knew it was about learning and what could I do that other people have done and enhanced their performance. If I have to be in for nine then I’am getting up at half-seven and not half-eight anymore.”

“He’s the type of coach I like, a communicator, someone who watches you every day. He sees your mood. You can go to him and say how you feel and can be quite passionate sometimes. I know he knows how I work so personally I’ve found him unbelievable. That’s the type of coach I like, someone that I feel I can go to, tell them how I feel and what I want to get out of this and this.”

Cooney will also have a new halfback team-mate in Ian Madigan, whose fitness has struck Cooney, and a potential rival for place-kicking duties.

“He actually really enjoys [kicking] competitions. I probably fell into doing a few of them at the start and probably wasn’t getting enough out of my sessions. So, today I told him I am done with those competitions because I don’t want to buy him donuts anymore.”

Madigan’s arrival should certainly strengthen Ulster’s options, despite the loss of their influential captain Iain Henderson. No less than Leinster, they resume well placed for a semi-final in the Pro 14 and with an away Champions Cup quarter-final against Toulouse.

At the end of all a Lions tour is scheduled to take place in South Africa next summer, and Cooney is not reticent about stating his ambitions to make the cut.

“I wrote it down on my five-year life plan nearly four years ago and I was playing for Connacht Eagles against Germany. I remember thinking at the time ‘you are miles and miles away from this but why not aim for the furthest thing you could aim for?’ So if I did, it would be incredible.”

That goal was also a spur when he was struggling for motivation during lockdown.

“Sitting on a watt bike it definitely did drive me and it is obviously the result of a lot of hard work. I have a lot of stuff to do and my mantra for the last three/four years was always to play well for Ulster.

“I remember my sister telling me that if I keep playing well then they can’t not look at me, and there were times where I didn’t make the November internationals or the Six Nations and I didn’t make the World Cup, but I went back to the fact that I have to keep playing well so they can’t overlook me. It’s probably a cliche but it is what has worked for me and what I do with Ulster will hopefully now come through with other teams.”