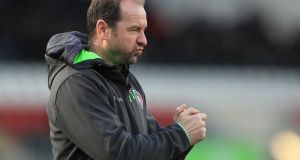 Geordan Murphy was a few days into life as Leicester Tigers Director of Rugby when a pandemic-inspired nightmare visited the club.

Manu Tuilagi is a Sale Shark now, ending a 20-year relationship between six Samoan brothers and England’s most successful team.

In July Murphy oversaw the departure of five players, including former Leinster centre Noel Reid, who was snapped up by Agen, after each man rejected the 25 per cent pay cut introduced to fend off the threat of financial collapse caused by Leicester’s inability to pack 25,000 supporters into Welford Road every other Saturday.

“It was a strange situation that we found ourselves in,” Murphy told The Irish Times this week. “We, as a rugby club, were hardest hit for having a big fan base that we rely heavily on.

“We are not cash rich but as a PLC, before Covid hit, we did have money in the bank. Initially we used the government furlough scheme before deciding upon 25 per cent year long reduction in wages.

Tuilagi was the highest profile player to pull the plug. The 29-year-old England international’s career was almost destroyed by multiple injuries and in 2019 he rejected a multi-million euro switch to Racing 92 to re-sign for the Tigers. He can probably command one more seven figure contract.

“I’ve never come across anything like this in 23 years in professional rugby,” Murphy continued. “The survival of the club is the most important thing. We didn’t [reduce wages] because we wanted to, it was because we had to, like any business in the same situation.”

Still, it must have been tough seeing Tuilagi - who grew up watching Murphy and his brothers win trophies - refusing the salary reduction to join Steve Diamond’s Sale, of all places?

“We had to draw a line in the sand somewhere. When Steve [Borthwick] started as head coach we wanted to give him a squad he can work with so we could start planning for the way we are going to play. We were conscious of not letting this drag on.

“What’s done is done. We have had to move on and there is actually really good energy around the place.”

“Noel had a personal decision to make and has got a great gig in Agen so we wish him well. We are not going to hold any grudges against people. It is a short career span and they have to make the most of it if they can.

“I couldn’t speak highly enough about Noel. We knew the type of player we were getting. It’s a shame he went.”

Just as Leinster protected Leo Cullen in 2016, Leicester saw the value in holding onto a personality that captained and then coached the club he joined from Naas RFC as a skinny teenager in 1997.

Murphy and Cullen have known each other since representative school days. That’s what prompted the recruitment of Borthwick in a similar role to Stuart Lancaster in Dublin.

“To be quite honest Leinster was one of the systems that I really looked at,” said the 42-year-old who played 72 times for Ireland. “I spoke to Leo over lockdown - I consider him a really good friend - and picked his brain about how he operated.

Just as some form of normality began to return Leicester became the first regional lockdown in the UK’s desperate battle to handle the coronavirus.

“There is one area that took Leicester into another lockdown. Oval Park [The Tigers’ training base] was inside the ‘blue line’ but they gave us dispensation as we had no cases since returning and are tested every week.

“They’ve still got that one area in lockdown but the rest of Leicester has been released.”

Full steam ahead then?

“Yes and no. There are still plenty of hoops we have to jump through. For example, we are fully training again but physios can’t do hands on work unless they are wearing full PPE and we can’t do massages or ice baths.”

“We got Nemani Nadolo in the country now and Kini Murimurivalu is waiting for a visa.

“Five or six players are waiting for visas. It’s not ideal. In the past we would just get this done in a week or two but the visa office has been closed. We just have to crack on.”