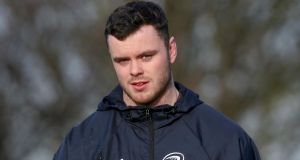 James Ryan is fit again and has been named in the Leinster XV for Saturday’s Champions Cup trip to play Benetton Treviso.

With the four-time winners looking to cement a top-two seeding - and with it a home quarter-final and potential semi-final - Leo Cullen has named a strong side for the trip to Italy.

The province’s backline remains unchanged following last weekend’s 42-14 bonus-point win over Lyon in Dublin. Jordan Larmour retains the 15 jersey and is joined in the back three by Dave Kearney and James Lowe.

Cullen has made a number of changes up front, with Andrew Porter starting in the frontrow alongside Cian Healy and Sean Cronin.

Ryan is reunited with Devin Toner in the engine room while Caelin Doris returns at number eight, with Max Deegan moving to six and Josh Van der Flier named at seven.