Giant secondrow has played with Sale, Castres and Toulouse over the last eight years 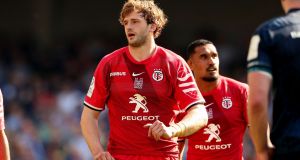 Richie Gray will return to Glasgow from Toulouse after spending eight years away from the Warriors. Photograph: Billy Stickland/Inpho

Richie Gray is heading back to Glasgow after confirming he will rejoin the Warriors this summer.

But there will be no reunion with his brother Jonny, who has already announced he will be joining Exeter at the end of the season.

The 6ft 10ins secondrower started his career with Glasgow before moving to Sale in 2012.

He moved to France 12 months later, spending three years with Castres before switching to Toulouse, who he helped to the Top 14 title last season.

But the 55-cap forward is now on his way back to where it all started and he could not be happier.

Gray –who this week missed out on a place in Gregor Townsend’s Six Nations squad through injury , said: “I’m absolutely delighted to be coming back to Glasgow. It’s great to be bringing my family back home, and also to come back to the club where it all began for me. It’s certainly something very exciting for me.

“I can’t wait to come back. We were still at Firhill when I left, and the club has obviously made big moves forward since then. Scotstoun is a great place to play rugby – it’s packed every week and I can’t wait to be a part of that.

“Danny is great, he’s really enthusiastic about the club and is very ambitious. We’re both on the same page and we’re both really looking forward to the challenge ahead.

“My focus until the end of the season is fully on Toulouse. I want to try and add a couple more titles to this club’s trophy cabinet. I’ve learnt a lot and gained a lot of experience, and been part of a successful side over the last couple of years.

“I want to bring that experience back to Glasgow and win titles with the Warriors.

“To come back and play at Scotstoun in front of my family, friends and the Warrior nation was a huge factor in my decision. The club’s had so much success in recent years in getting to the knockout stages of the Guinness Pro 14 and Heineken Champions Cup and I want to come back and be a part of that.”

Wilson, who will replace Dave Rennie this summer, said: “During my conversations with Richie it was clear he was very passionate about the club and he’ll be an excellent addition to our squad.

“He brings a wealth of experience from his time playing in England, France and internationally with Scotland and the British & Irish Lions. It’s great news that he has decided to come home to Glasgow next season and we’re looking forward to him joining us in the summer.

“Richie is our first new signing for next season, following the announcement of a number of renewals recently and we hope to be able to make further announcements in relation to next season’s squad over the coming weeks.”