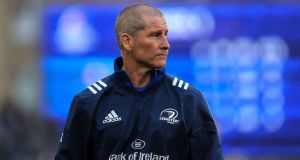 Stuart Lancaster has insisted he is ‘very happy’ with life at Leinster. Photograph: Ryan Byrne/Inpho

Stuart Lancaster, who is out of contract at the end of the season, has played down speculation linking him to a host of clubs in England and also to roles within the Ireland and England set-ups.

Negotiations are ongoing in relation to a new contract with the province, an environment - despite the occasional issues with commuting - in which he’s very happy.

Leinster’s senior coach admitted: “I’m used to it (speculation), number one, I’ve been consistent since I’ve been here. I’ve really enjoyed Leinster; I really enjoy coaching at Leinster. It’s a great team and a great environment to work in.

“I enjoy club coaching, I enjoy the day-in, day-out interaction with the players. I enjoy the moments when the internationals are away and we’ve got the younger players to coach. All this speculation, it’s like people are ringing me all the time; I don’t get any phonecalls. So, I’m just ploughing along, enjoying what I’m doing at Leinster.

“I don’t look too far ahead anymore, I was contracted with England until 2019 and that changed on the World Cup. I’ve stopped looking ahead now, but I can certainly reassure everyone I’m very happy at Leinster.

“There are definitely talks ongoing and I’m happy with where I’m at. The family situation works, it’s not ideal and I’ve said that consistently that flying backwards and forwards, my daughter’s just gone to university and my son is a year away from going to university. I occasionally see my wife. But yeah I’m certainly happy with Leinster but we’ll see how it all plays out.”

Lancaster endorsed the credentials of his former assistant at England, Andy Farrell, who will take over as Ireland head coach when Joe Schmidt steps down after the 2019 World Cup in Japan.

“It’s up to Andy to build his coaching team. The reality is he needs his coaching team to be ready by January 2020. I’ve not caught up with him actually since the announcement, I will do soon I’m sure and it will be up to him to shape that. I’ll have that conversation with him.

“He’s the right man for the job in my opinion. I think that when Joe announced he was going there was only one person I felt was qualified to do the job and that was Andy. He’s sat as an assistant coach for eight years now, four with me and four with Joe.

“And when you’re sat in that assistant coaching role you can learn a lot about what you would do when you get your chance and Andy has got the opportunity now over the next six to nine months to put that into place.”

So would he work with Farrell at Ireland if the roles were reversed? “It’s another hypothetical. I enjoy club coaching, the day-to-day stuff. For me it is all about the role that I would do that would give me the best opportunity to keep developing as a leader. But it’s up to Andy to formulate his plans, but one thing is for certain he will always get my 110 per cent support.”

1 CVC cuts Six Nations offer by half to €165m as talks continue on new deal
2 Could lack of sex force players to break the NBA’s bubble?
3 Jack Charlton era made GAA sit up and realise its greatest strength
4 Game Changers: Living beyond fear puts Alex Honnold above all others
5 Premier League clubs discuss advertising boycott in battle against online abuse
Real news has value SUBSCRIBE