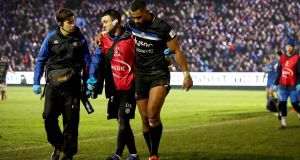 England winger Joe Cokanasiga is set to be out of action until the new year and faces a race to prove his fitness for the Six Nations opener against Ireland in Dublin after Bath confirmed he has suffered a torn medial knee ligament.

Cokanasiga, who made his breakthrough on the international stage during England’s autumn campaign, sustained a grade two medial ligament tear towards the end of Bath’s Champions Cup defeat by Leinster last Saturday and while the 18st back will see a specialist to determine the full extent of his layoff, Bath believe it could be up to six weeks.

The club are also hopeful it could prove to be as little as two but six weeks would see the 21-year-old ruled out until their final European pool match against Toulouse. With England’s Six Nations squad to be finalised a couple of days before that on January 16th, Eddie Jones may well have to gamble on the fitness of Cokanasiga, who scored a try on both of his first two England appearances – against Japan and Australia last month.

England begin their Six Nations campaign in Ireland on February 2nd with Jones already closing monitoring the fitness of Maro Itoje and Jack Nowell, both of whom are sidelined by injury but expected to be back for Saracens and Exeter respectively at some point next month.

Jonathan Joseph has suffered another minor setback on his comeback from the long-term foot injury he sustained towards the end of last season. He is closing in on a return for Bath but the director of rugby, Todd Blackadder, said last weekend: “He has a bit of a sore Achilles, so the more exposure he gets he’s pinging and tweaking other things. He might be back full training this week, he might break down. It is one of those things that happens. We focus on the living, not the dead.”

Bath are hopeful Anthony Watson will also make his return early next year but whether he comes into contention for Jones’s squad remains uncertain, having been sidelined since picking up the initial injury in the Six Nations finale against Ireland in March.

Zach Mercer is, however, closing in on a return from a knee injury and could feature against Leinster at the Aviva stadium on Saturday, having missed out last Saturday. – Guardian