Paddy Jackson cancels Christmas at home as Perpignan struggle on 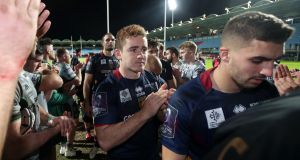 Perpignan’s Paddy Jackson leaves the pitch after the defeat to Connacht in the Challenge Cup at Stade Aime Giral on Friday night. Photograph: Billy Stickland/Inpho

Former Ireland outhalf Paddy Jackson will not be celebrating Christmas in Ireland as Perpignan chase a first Top 14 win after a miserable run of 15 defeats this season.

The 26-year-old, who was booed by home supporters in the club’s 21-36 European defeat to Connacht on Friday night, has been linked with a move to Lyon unless the Catalan club can arrest its poor record and stave off relegation following promotion from the Pro D2 last season.

Rival clubs have been in contact with him, which he has discussed with Perpignan’s director of rugby, Christian Lana, but Jackson says he remains committed to the French club this season.

“It’s that time of year clubs are looking for players, you take phone calls, have a conversation. It’s a part of rugby and you have to deal with it, but the primary goal is winning [here].

“I have sat down with Patrick [Arlettaz, Perpignan coach] and Christian [Lanta] and had talks with them, but we agreed the main goal is to try to win and stay in the Top 14 and win as many games as possible.”

Jackson says his absence from Galway in the first of the back-to-back losses to Connacht, and against Sale, was a coaching decision – nor will he be returning to Ireland for Christmas.

“It is part of what the coaches decided. I don’t think it would have mattered who the team was. It was a decision in terms of resting players and keeping players fresh for Top 14.

“We’ve got Racing on December 22nd and Clermont on the 29th, so I will not be getting home for Christmas. They are two huge games, so we must make sure we are all in top form because they are going to be tough ones.”

Jackson says the Perpignan support has been “incredible” despite a season without a win.

“It is tough, no one is going to deny it. We haven’t won a game, yet the supporters are still here every week, cheering us on. Rugby wise, it’s a very open game, very physical, very direct. French teams love to play the ball, it’s a trend that flows through all the teams here.

“It is more structured in Ireland, but here it is very physical and old school rugby.”

Perpignan remain rooted to the bottom of the Top 14 table after 11 defeats, and still without a Challenge Cup win in Pool 3, while Connacht’s win in Stade Aime Giral has narrowed the gap on leaders Sale to three points after Bordeaux-Begles’ shock 17-14 win at the AJ Bell on Saturday.

It ensures Connacht are still very much in the competition despite a poor return of eight points from the opening three fixtures, and now gives them a real chance to top the group.

Friday evening’s win in Perpignan was all the more pleasing for Connacht coach Andy Friend, who had kept many of his frontliners at home. Despite a 22-8 half-time lead, Perpignan hit back with two tries, but after the home side’s red card, Connacht prevailed with a five-try haul to bag their fifth win in a row in both the Pro14 and European competitions.

“We didn’t panic and that was the most important thing,” said Friend. “ With some new combinations and young players, they probably had every reason to panic and maybe go a bit soft, but we didn’t do that.

“I’m really pleased with the older heads who came on and settled things down, while the young players keep rising to the occasion.

“It’s a real compliment to the players who fielded. We are building that depth and belief within the squad. We have a fair chance now of qualifying. Last weekend’s weather didn’t allow us to get the bonus point, but we did in France, and that was a real plus.”