Leinster demonstrate their extraordinary depth with victory over Bath 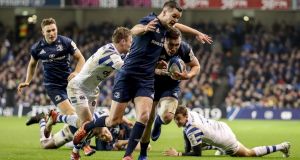 Leinster’s Rory O’Loughlin on the attack with Johnny Sexton in support against Bath at the Aviva Stadium, Dublin. Photograph: ©INPHO/Dan Sheridan

The numbers are starting to stack up nicely for Leinster. When they welcome Toulouse in the penultimate round of the Champions Cup at the RDS on January 12th, they’ll do so on the back of 12 home wins in a row in Europe.

In scoring six tries against Bath on Saturday, they have taken their haul to 14 tries and 94 points in their two home games to date. Not bad.

It’s not often that a head coach makes three changes in personnel and two positional adjustments to a winning side, and sees those alterations all so handsomely vindicated, although then again, this is in the context of Leinster’s extraordinary strength in depth.

All three recalled players (Jack Conan, Rory O’Loughlin and Adam Byrne) scored tries in the first half, as Leinster claimed their bonus point by the 38th minute.

“Em, yeah. But it’s not all just about scoring tries,” said the ego-free Leo Cullen, not exactly from the José Mourinho school of self-promotion. The complete opposite in fact.

“It is being realistic enough to know, even though we won the game last week, that there are parts of our performance that we weren’t happy with, so it is trying to take the learnings from that game and understand how we can get better,” Cullen added.

“I think the more time we spend together, the better we can be, if we are prepared to take on board feedback and work hard towards what we are trying to achieve.

“Every week we ask ourselves the question: ‘Did we get the selection right?’ And you never know the answer for sure, but we certainly ask the question. A lot of guys are pushing hard for selection and will get the chance to play now over the next few weeks.

“That’s what we want, a competitive group. You see the amount of injuries there are now and it is about being smart about how we manage the group. We have some guys who are mad keen to play.”

Conan was a case in point. He added real ballast at number eight (nine carries for 46m, including two clean breaks and three defenders beaten) and lots more good work at the breakdown and in latching on to carriers. Then, when Rhys Ruddock was brought on, he made 13 tackles, second only to Devin Toner’s eye-catching 22.

Furthermore, Dan Leavy was more effective in reverting to his customary role of blindside, and also scored. So with the outstanding James Ryan again leading the charge, Leinster’s improved work in contact and speedier identification of Bath’s threat over the ball reduced, if not negated, the influence of Sam Underhill, Francois Louw and co.

With Luke McGrath moving the ball away quickly, Leinster were able to build through the phases in trademark fashion and stretch Bath’s defence. With their maul and especially scrum dominant, at least until the second-half reshuffling, this was more like the real Leinster.

The reshuffled backline also had plenty of potency. In O’Loughlin’s first European start since January 2017, he scored his first try in the competition since the corresponding game here against Northampton two years ago.

And in Byrne’s first European outing since last season’s pool opener against Montpellier, he scored his first try in the competition since a match against the same opponents in January 2017. You could see, and almost hear, how much their scores meant to them.

Furthermore, Jordan Larmour’s shift to fullback saw him hit the line from Johnny Sexton’s wraparound, with Garry Ringrose to lay on O’Loughlin’s try, and his counterattacking eventually led to Byrne’s aerial take and try from Sexton’s pinpoint crosskick with a free play.

Meanwhile, James Lowe did what he does, scoring another try and providing the X factor with his daring offloading, notably when teeing up Jamison Gibson-Park.

For O’Loughlin, there was also the man of the match gong, although he generously admitted it could have been awarded to any one of many. More relevant was making the most of this opportunity, a first start at 12 in his 50th game for Leinster, having previously played at outside centre, on either wing or off the bench.

“You would always like to have a set position but it’s so competitive in that backline that whatever opportunity I get, I’m going to have to take.

“For me, if I can start in Europe – that’s what I have been told by all the coaches – regular game-time in Europe is going to take you to the next level. If it was a case that I wasn’t starting at all or not getting any opportunities to start in a game like this, then maybe I would get frustrated, but at the moment I am happy to take it when it comes.”

Joe Schmidt and Andy Farrell were there too, the pair receiving a rather warmer reception before Storm Deirdre’s second-half return diminished the crowd’s numbers. Their presence wasn’t lost on O’Loughlin.

“Since I’ve been [in the] Irish camp whenever I’ve talked to Joe it’s always been, ‘Games in Europe, seeing you play in big games in Europe’, and it’s been frustrating – last year I got injuries at the wrong time and kind of missed out.

“Even when lads were injured I missed out on Europe, and that was always the feedback, that he [Schmidt] wanted to see me play in Europe. And again last week I was just coming back from injury, and while I kind of understood why they didn’t want to throw me in, it was kind of frustrating, I suppose.

“But when I got the opportunity to start this week, that was just always on my mind, was putting in a performance and making it as hard as possible for a coach to drop you, I suppose, and I think I did alright today.”

Yep, he did more than alright.