Club rugby is producing international stars of the future 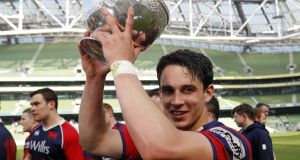 Club rugby has been liberally populated with international stars of the future based on the specific evidence of recent semi-finals and finals in the All Ireland League Division 1A. This weekend Clontarf will host defending champions, Lansdowne at Castle Avenue on Saturday (2.30) and 24-hours later last season’s beaten finalists Cork Constitution will welcome Dublin University to Temple Hill.

The two matches will contain a flavour of Ireland’s brightest and best young prospects just as they have done for the past four seasons since the league structure in Division 1A reverted to end of season playoffs rather than crowning the club that finished top of the table as champions. Clontarf were the last to claim the title in that particular fashion in the 2013-2014 season.

A semi-final in the 2015-2016 tournament, when Clontarf beat UCD 24-10 at Castle Avenue offers a classic illustration of the talent that has graced the playoffs.

Clontarf had Joey Carbery at outhalf, current Leinster players Conor O’Brien, Bryan Byrne and Vakh Abdaladze, Michael Noone who spent a couple of seasons with the Leicester Tigers and Ireland Sevens international and Leinster wing Mick McGrath, to highlight just some of the representative players that togged out for the home side.

Carbery would go on to inspire Clontarf to victory over a Cork Constitution team that included Darren Sweetnam at fullback, ex-Munster and Aurillac lock Brian Hayes, as well as Niall Kenneally and secondrow Conor Kindregan, who were once on the books at Munster and Connacht respectively and both of whom lined out for the Ireland Clubs team. It was one of the games of the season; at any level.

The previous year the Lansdowne team that beat Clontarf 18-17 in the final boasted a backline of Cian Kelleher (Connacht), Tom Farrell (Connacht), Tom Daly (Connacht) in the centre, Ireland Sevens internationals Mark Roche and Ian Fitzpatrick on the wings and Scott Deasy (ex Munster) and current Ireland Women’s coach Adam Griggs at halfback. Tadhg Beirne (Munster and Ireland) was on the bench.

Clontarf had Conor O’Brien, Collie O’Shea (Leinster), Matt D’Arcy, one of the finest club players of the last decade and on the left wing the former Clongowes schoolboy Max McFarland, who is now one of the stars of the Sevens World Series with Scotland, having qualified through his Glaswegian grandfather.

Cork Con exacted revenge over Clontarf in the 2017 final, Munster’s Shane Daly starting at fullback and while the team was littered with many of the players already mentioned, it also contained tighthead Rory Burke, centre Ned Hodson and loosehead Liam O’Connor were all part of the Munster academy at that time.

Clontarf too retained many familiar faces but for that match were also able to call upon Leinster secondrow Mick Kearney and the well travelled Jason Harris Wright (Leinster, Bristol, Connacht, London Irish, Bristol and currently the Houston Sabercats).

The pathway to professional rugby for Irish club players is not limited to European destinations. There are a significant number of Irish club players who have won contracts in the fledgling Major League Rugby Championships in America and among the most recent recruits are Shannon centre Will Leonard and ex Lansdowne wing Mark O’Keeffe, both of whom play for Rugby United New York.

A whistle-stop statistical tour of the finals under scrutiny reveals that three teams have contested the four finals, Lansdowne lead the way with two wins and that on three occasions the club that topped the table in the regular season went on to win the final. The exception was when Con in 2017, finished fourth but beat Lansdowne and then Clontarf in a final, both at the Aviva stadium.

The away team has won three of eight semi-finals during that period with Con managing that feat twice. They topped the table this season and welcome Trinity on Sunday, a match that depending on IRFU player release issues could contain a number of players that helped Ireland win an Under-20 Six Nations Grand Slam this season.

The Leinster team for Saturday’s Pro14 game in Belfast will have a significant bearing on the composition of the Clontarf and Lansdowne at Castle Avenue but the presence of players like Eamon Mills, Peter Sullivan, Daniel McEvoy, Harry Brennan, Sean O’Brien, Michael Courtney, Jack Power and Angus Lloyd will certainly ramp up the entertainment quotient.

For those who can make it there’ll be plenty to admire in Dublin and Cork this weekend.