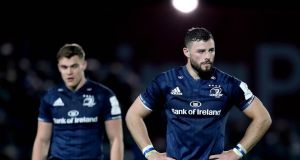 Robbie Henshaw’s return a week before the Champions Cup semi-final against Toulouse was as well timed as his injury was freakishly unlucky.

Hurt in a training collision the week after he started against England in the opening Six Nations defeat, Henshaw’s internal bleeding in his quad continued for two weeks. Finally it required him to fly to London to seek specialist attention.

But his return to the team has become more of a rekindling of his collaboration with Garry Ringrose as a straight forward return to fitness. The Irish pair make up one of the strongest centre partnerships in the competition. His return, along with others, has been central to Leinster’s reclamation of Irish optimism facing into a Saracens final.

“It’s the amount of minutes you play together,” says Henshaw. “You build a combination and you build a relationship and that’s been the way playing with Garry. I know him pretty well at this stage. That’s down to how much you train and play together.

“When you are injured you attend every team meeting and do all the video footage. So we are up to date with what’s going on and what the boys are doing. It’s not just rehab and coming into the gym when you are injured. You have to be involved in all the rugby meetings as well.”

In recent years Ringrose has been credited with organising the Leinster defensive out wide in a way Brian O’Driscoll used to do. It requires intelligence and an awareness of how Saracens will attack space and is a specialist ability.

This week the pair may face Alex Lozowski and Brad Barritt: Lozowski, a former Chelsea Academy footballer and called into Eddie Jones’s Six Nations squad in 2017, the other a gnarled veteran, who earned the first of his 26 England appearances in 2012.

“Their skipper Brad Barritt, I saw him against Munster when he came off at half-time but he played really well for 40 minutes when he seemed to have a bit of a knock,” says Henshaw. “It maybe shows the kind of person he is that he put his hand up even when he wasn’t 100 per cent. He played unbelievable in the minutes he played.

“Lozowski is a deceptive player. He played a lot at 10 but he is pretty quick and he is strong in contact so we will have our work cut out on the day and know that the likes of Liam Williams and Alex Goode are deadly when they get ball in space.”

The drive for five has also become a motivating factor, a win would separate Leinster from the rest as the only team to have won five European champions medals, one ahead of Toulouse.

“It’s a huge driver for us as a collective,” he says. “Back to back were the words at the start of the season from some of the players and to be in that position now. If we were to do that it would be incredible. Toulouse was a good performance . . . definitely there is another gear in us. We can improve again on that.”

With Henshaw more physical on the inside and Ringrose always looking to create an outside break, and in possession of a step that can stretch Saracens, the two have different styles that are mutually complementary. When they play well and dovetail in offence and defence, Leinster do too and their opponents always struggle.

“It goes into the work you do during the week and part of that is sitting down and having a chat,” says Henshaw. “Going through some video and having a look at areas of improvement, the threats that will come that week.”