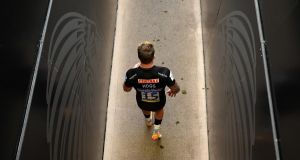 Exeter this weekend play against Racing 92 in their first European Champions Cup final before travelling to Twickenham for the fifth consecutive year to take on Wasps for the Premiership title. File photograph: Getty Images

Before England played New Zealand in the 1995 World Cup semi-final in Cape Town, they did not pay too much attention to Jonah Lomu, the 19-year-old wing who was to reduce their defensive wall to rubble and reconstruct a game that was in the death throes of amateurism.

“Nobody really knew much about him or his capabilities,” recalled the England No 8 that afternoon, Dean Richards, last year. “I do not think we did our due diligence on Lomu: we may have discussed him, but that was probably as much as we did do.”

England preferred to focus on themselves, although in the current era of constant analysis, they would have known what was coming. Lomu’s weapon was not stealth: being aware of what he was going to do was one thing, thwarting him another.

It is the same with Exeter who this weekend play against Racing 92 in their first European Champions Cup final before travelling to Twickenham for the fifth consecutive year to take on Wasps for the Premiership title – provided, of course, that the Covid outbreak at Wasps does not derail the match.

Wasps will know exactly what to expect, as Bath did in last weekend’s semi-final, opponents who are as relentless in defence as they are in attack, able to absorb pressure and invariably fashion a try when they camp near their opponents’ line; well-drilled, disciplined, rarely prone to mistakes, outstanding technically and single-minded. The bulk of their tries are scored by forwards, who have contributed more than twice as many as outside backs in all competitions this season.

They force penalties out of opposing teams but rarely kick for goal: they landed one penalty in their last seven Premiership matches. Instead, they either take it quickly to exploit a defence that is rushing to assemble itself, or kick to touch and drive a lineout. They defend and attack with an intensity and efficiency even Saracens struggle to match.

Wasps, who will have to hope further Covid tests do not add more to their tally of four players and three backroom positives, have had a season of two halves, the first so nondescript they even lost to Leicester. That defeat prompted a change at the top with their head coach, Lee Blackett, taking charge and director of rugby, Dai Young, freed to pursue other opportunities. The second half was so soaked in tries and bonus points that they reduced Exeter’s lead at the top to three points but they will be the underdogs three years after a late penalty cost them the 2017 final against the Chiefs.

Blackett made the point this week that the match was not a clash in styles. Wasps may be known for their willingness to run from anywhere, but their semi-final victory over Bristol was built on forward dominance and defence, while Exeter, with the likes of Stuart Hogg, Henry Slade and Joe Simmonds in their back division, are hardly one-dimensional.

“I think it is disrespectful to Exeter to say that the final will be a clash of styles,” said Blackett. “Everyone seems to think they are a pick-and-go, driving-maul team but there is a lot more to them than that. I have a lot of respect for what Rob Baxter [the director of rugby] has done there. You have to admire them and to beat them you have to be on top of your game in every aspect for 80 minutes. We know what they bring, but we have to focus on ourselves.”

An unknown factor is Saturday’s encounter with Racing. In 2014, after Saracens had lost their first Champions Cup final, to Toulon in Cardiff, they were beaten by Northampton in the Premiership final seven days later. Sarries’ mission then was to conquer Europe and a week was not long enough to park their chagrin.

Exeter do not seem so obsessed with Europe despite their failure, until the current campaign, to reach the semi-finals of the Champions Cup, as if knocking on a door long and loudly enough will prompt it to open. They have reached the top in their own way, a singular club not bound by convention or the cartel that is Premiership Rugby.

They are the great contrarians, befitting a club who were not one of the Premiership’s founding members and were not treated as an equal, financially at least, for a number of years after gaining promotion. It was Exeter who broke out of the Premiership’s cloisters to denounce Saracens for salary cap breaches and ensure they did not escape with another telling off and the Chiefs distanced themselves from the round of pay cuts initiated shortly after lockdown, pointing out they were the only profitable one of the 13.

They took a different route to the top than Saracens, building their squad on money earned rather than debt, although it has helped that their main sponsors are the company set up by their chairman and chief executive, Tony Rowe. Their path has been one of steady progress, blinded not by the light nor dreaming, and in Baxter they have someone whose fire has the same heat as when he was appointed in 2009.

He had just turned 38 then, one year older than Blackett when he took charge of Wasps. When Exeter’s teams are announced, they are accompanied by hundreds of words of explanation: many clubs release little more than a list of names and a brief quote from the person in charge, but Baxter lays everything out, disdainful of soundbites.

It would be no surprise if Exeter succeeded Saracens as double champions. Their only defeat this season when they picked their strongest available side was at home to Bristol in November when, uncharacteristically, they blew a 17-0 lead. A team that runs on certainty rather than emotion has not lapsed since. - Guardian