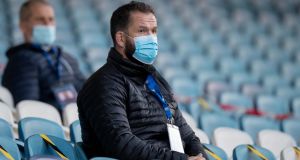 One of the more immediate and striking aspects of the 35-man squad Andy Farrell and his assistant coaches will assemble next week for the rearranged games at home to Italy and away to France is how much it reflects form.

This in turn sends out a message to the wider group that performances will be rewarded and is perhaps most evident in the choices at scrum-half. The uncapped New Zealand-born and reared Jamison Gibson-Park has been playing with supreme confidence and, likewise, Kieran Marmion has looked back to his best in earning a recall.

At the outset of the resumption, the odds on them usurping John Cooney, a stand-out performer and regular match-winner for Ulster who won three caps off the bench in the Six Nations before the hiatus, and Luke McGrath would have been considerable. But, by contrast, the form of the latter two has dipped.

That said, it all seems particularly ruthless on Cooney, who has been playing behind a struggling back and in a struggling team, and was replaced as Ulster’s starting scrum-half by Alby Mathewson in the Pro14 final.

The inclusion of both Gibson-Park and Marmion perhaps indicates that Farrell, Mike Catt and co are looking for a higher-tempo, wider game from Ireland.

Similarly in the back three, the chances of the uncapped duo of Hugo Keenan and Shane Daly being amongst five outside backs would have seemed even more remote during the lockdown. Granted, no less than with their provinces, injuries to Keith Earls, Will Addison and Dave Kearney have afforded them their opportunities.

Even so, these two are clear beneficiaries of the Sevens programme, from which they have emerged as superior players, with their improved passing, tackling and decision-making.

The same is true up front, notably in the second row, where the uncapped but hugely promising 21-year-old Ryan Baird comes in, along with the recalled Tadhg Beirne and Quinn Roux, whereas the 70-times capped 34-year-old Devin Toner misses out along with Ultan Dillane.

Akin to Cooney, it’s quite a sudden and steep fall for Toner who, after all, played in all three Six Nations games earlier in the year and started the last of them against England at Twickenham.

Throw in the addition of the young Munster scrum-half Craig Casey and young Leinster out-half Hugo Byrne, Finn Wycherley, as well as James Lowe, who becomes eligible in November, and James Tracy to train with the squad, and it’s clear that the countdown to the 2023 World Cup in less than three years’ time has quickened.

Leinster’s defeat by Saracens, wounding though it was, at least ensures the squad will also have an uninterrupted two-week build-up to the Italian games without the distraction of a Heineken Champions Cup final next weekend.

Injuries have forced the Irish management’s hand to some degree, for, in addition to the aforementioned trio of outside backs, Billy Burns, Tadhg Furlong, Cian Healy, Tom O’Toole and Max Deegan are others who have been ruled out since featuring in the Six Nations squads earlier this year.

Disconcertingly, with the strong-scrummaging Italians and especially French pack in mind, the cupboard looks particularly bare at prop without Kilcoyne and Furlong, so much so that only five rather than six have been named. A la Toner, Jack McGrath is a notable omission, while Ed Byrne is perhaps the most surprising call-up.

What’s more, with Cian Healy the only other recognised loosehead in the squad, Byrne looks sure to make his debut against the Italians.

With the title still at stake, Ireland will also want to go full tilt at these two Six Nations games, before delving further into the squad for the Autumn Nations Cup matches, certainly against Georgia.

Hence, although that first game against Italy at the Aviva Stadium offers more scope for experimentation, the starting line-up especially and match-day 23 is liable to fall along familiar lines.

The increasing winds of change under Farrell are reflected in the presence of six uncapped players and, quite possibly, Keenan or Daly could feature against the Italians, as there are only three other specialist outside backs in the squad.

The selection at full-back is certainly open to conjecture. All five are, to at least some degree, wingers-cum-15s, witness how Leinster exchanged positions between Keenan and Jordan Larmour against the Dragons last weekend.

Jacob Stockdale has also been tried at full-back on several occasions by Ulster this season, with decidedly mixed results. While still a match-winner going forward, his defence and positioning were less than foolproof in the games against Edinburgh and Toulouse.

In the heel of the hunt, it could well be that Larmour is retained at full-back, with Conway and Stockdale on the wings, as was the case in all three Six Nations games in February. But Stockdale especially will be feeling the heat from Lowe on the left wing.

Likewise, all the second-rows will be feeling the heat from the athletic and ridiculously quick Baird, if perhaps less in the case of his trailblazer from the St Michael’s production line, James Ryan.

Baird’s time is, well, only a matter of time.

As with the back three, the other burning selection issue for the upcoming games against Italy and France are the back-row. There, once again, the upwardly mobile trajectory of Caelan Doris points to a shake-up, not least given the badly needed ballast he injected off the bench last time out in the defeat by England.

Who knows how his Six Nations might have panned out in February but for the concussion which restricted his debut against Scotland to four minutes and ruled him out of the win over Wales.

The 22-year-old Doris looks sure to start, along with either Josh van der Flier again at openside or another of the new young breed, the uncapped Will Connors, who word has it was in line for a first cap against Italy in March before that game was called off.

That could leave CJ Stander, Peter O’Mahony and the recalled Jack Conan vying for one starting spot and a place on the bench. Doris has been playing at “6” for the first time with Leinster this season, while another pointer was in that opening Six Nations game against Scotland, when Stander was at “6” and O’Mahony on the bench.

Either way, the times they are a-changing.

5 Johnny Sexton circles the wagons and insists Ireland are improving