Clermont defeat takes Ulster down to the wire 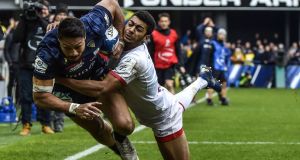 Ulster surrendered the lead of Pool 3 to Clermont after the hosts fought back in the second-half at the Stade Marcel Michelin to claim a 29-13 victory Champions Cup victory. Looking for what would have been only their fifth ever victory in France, the visitors had led 10-9 at the break but would ultimately score only three points after John Cooney converted his own score with eight minutes gone.

With Bath at home next weekend, and needing only a victory to be assured of their knockout place, their destiny remains very much in their own hands but they will return to Belfast feeling that this was something of an opportunity missed.

They had gotten off to the most promising of starts with their primary ball carriers Stuart McCloskey and the returned Marcell Coetzee both advancing the ball well. While momentarily there seemed more on offer if they could have only gotten the ball wide to take advantage of a glaring overlap, they had to be content with only a Cooney penalty when French World Cup villain Sebastien Vahaamahina was caught off his feet.

A high tackle from skipper Iain Henderson gave Clermont the opportunity of a swift response but, like their guests, the French side would have to be content with only three, Camille Lopez dropping a goal after Les Jaunards made no headway from the maul.

Cooney’s score would come only moments later, adventurous work from from forwards Jack McGrath, Sean Reidy and Marty Moore preceding the in-form scrumhalf fending off the tackle of Alivereti Raka to finish off the move.

The Irish Six Nations hopeful would convert his own score, though a Morgan Parra penalty would cut the deficit to four. The French number nine would find himself in the bin soon after though, his offside as Ulster attacked five metres out the product of yet more sensational offloading from Dan McFarland’s men. Clermont escaped without further sanction, however, as Ulster’s recent lineout woes resurfaced at the worst possible moment from the resulting penalty. On such moments can games turn.

The French side would make light of the man disadvantage, only a try-saving tackle from Robert Baloucoune preventing them from taking the lead when down to 14 as Ulster’s considerable superiority from the opening stages ebbed away slowly. Returning just after the half hour mark, Parra would end the first half with another penalty following an Ulster offside. A one-point lead at the turn, the province surely went into the break feeling they should have been considerably further ahead.

Clermont would rue missed opportunities too, Parra somehow skewing wide from the tee after his forward pack eked out an early penalty in the second-half but they were by now firmly in the ascendancy. The scrum was becoming an issue for Ulster, just as it had when these two sides met in Belfast, and it was from a penalty on their own feed that ultimately saw them cough up their lead that they would never regain, Alivereti Raka eventually breaking down the blindside after sustained pressure.

Momentum had shifted considerably but, to Ulster’s credit, they rallied to a degree and used the power of Coetzee off the base to mask the deficiencies of their creaking set-piece. But Cooney’s next penalty was quickly matched by Parra and, after yet more sanction at the scrum, his replacement Greig Laidlaw kicked Ulster out of losing bonus-point territory with ten minutes to go.

Any rescue act would be left to Ulster’s relatively callow replacements after McFarland emptied his bench but the final minutes were instead all Clermont, George Moala’s late try adding a gloss to the final score.