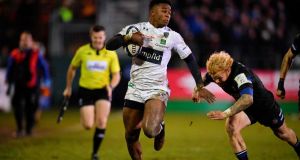 Clermont wing Samuel Ezeala in action against Bath during the Heineken Champions Cup game at The Rec. Photograph: Daniel Leal-Olivas/AFP via Getty Images

Nothing less than victory was going to save Bath in Europe this season and the guillotine has effectively fallen. Three straight defeats in Pool Three before a trip to the Massif Central is not the stuff of Champions Cup dreams and the great Heineken Cup days of yore are an increasingly distant memory.

Clermont only rarely had to shift much beyond third gear to claim a comfortable bonus-point win that put them on top of the pool ahead of Ulster’s game against Harlequins in Belfast on Saturday afternoon. They sealed it with three final-quarter tries, two of them from their debutant Spanish wing Samuel Ezeala, who also set one up for his more experienced flanker Alexandre Lapandry. Aside from a nice first-half try from Rhys Priestland, Bath were left with precious little to show for their efforts on another grim evening for their long-suffering supporters.

This was the 100th game Bath have played in Europe but it is starting to feel like another lifetime since they won the big prize in 1998. Just about the only consolation for the Rec faithful was the return of the former Bath favourite Nick Abendanon, who was making his 50th tournament appearance, but otherwise this was a second forgettable Friday night in succession under the Somerset lights.

The heavy surface again did not help, Bath having got bogged down against Saracens last week. It made it a night for mental agility as well as brawn and early on the signs were deceptively promising for the hosts. With the whole of Clermont expecting Priestland to attempt a 13th-minute drop goal the Welsh flyhalf instead scooted left and, with the French defence flat-footed, cut through to score the game’s first points.

His angled conversion was also spot on and visibly boosted home confidence, with Jonathan Joseph putting Jamie Roberts through another gap which, on another day, might have yielded a try as well. With some of the floodlights temporarily failing as well, it was looking an increasingly gloomy night for the visitors.

Clermont, though, are the kind of team who can flick the switch at any moment. With the stadium lights also fully restored, their captain Morgan Parra went on a curving run behind a couple of team-mates and gave his centre George Moala enough space to crash over. Parra converted to level the scores but a penalty in front of the posts six minutes before the interval should have given Bath a useful half-time lead. Instead, rather oddly, they chose to gamble on a kick to the corner, only for Clermont to defend the resultant maul with some ease.

Having lost by one and six points respectively in their two previous pool games, the margins in Europe are too fine to mess about, particularly on heavy surfaces like this. If, like Exeter, your driven lineout is a consistent weapon it is a risk worth taking. Bath, unfortunately, are not yet the sum of their expensive parts, particularly with several forwards out injured.

They also failed to benefit from the influential Parra failing to return for the second half. His replacement Greig Laidlaw coolly landed a couple of characteristically neat penalties to trump one from Priestland but although a third attempt out of the mire from almost 50 metres unsurprisingly fell short it did not ultimately matter.

Ezeala’s nicely angled line earned him a deserved 66th-minute try before the 19-year-old, who was born in Barcelona, supplied the supporting Lapandry with a deft try-scoring pass two minutes later and then grabbed a second for himself before Joseph scored a consolation.

As against Ulster and Wasps, Bath simply did not have that kind of artillery and, with their Premiership season also producing little joy, face an uncomfortable Christmas.

If they can avoid being completely smashed in France next weekend it will, relatively speaking, feel like a blessed relief. For Stuart Hooper, their new director or rugby, this is not so far proving the happiest of campaigns. – Guardian