Jordan Lamour starts at fullback as Leinster take on Northampton 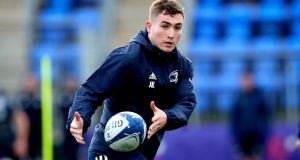 Jordan Larmour has been selected to start at fullback ahead of Rob Kearney for Leinster’s trip to play Northampton Saints at Franklin’s Gardens on Saturday.

Leo Cullen has named a strong side for the visit to England, with Dave Kearney and James Lowe completing the back three, while Ireland’s Garry Ringrose and Robbie Henshaw line up in midfield.

Johnny Sexton captains the side from outhalf, with Jamison Gibson-Park starting at number nine and Luke McGrath named on the bench.

Cian Healy, Rónan Kelleher and Andrew Porter start in the frontrow - Tadhg Furlong is among the replacements - with Devin Toner and James Ryan in the engine room.

In the backrow, Caelan Doris has been named at number eight, with the Ireland duo of Rhys Ruddock and Josh van der Flier starting as the flankers.

For the hosts Wales outhalf Dan Biggar takes the number 10 jersey, setting up what is likely to be an intriguing battle with Sexton.