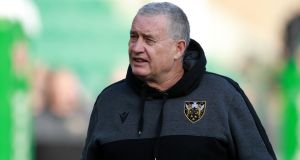 Chris Boyd was impressed with the quality of Leinster during their Champions Cup loss. Photo: David Rogers/Getty Images

True wisdom tends to come from independent observation. Chris Boyd has climbed high enough up the rugby food chain in his 61 years to understand what Leinster just did to his Northampton Saints.

“What a difference a well makes, eh?” the Kiwi began. “That’s part of the education. There are not that many sides in the Premiership who can step up like that.”

The opening 40 minutes at Franklin’s Gardens on Saturday was a thrilling spectacle that had the locals feeling like they were witnessing one of those humdinger east midlands derbies from the days when Leo Cullen used to walk the Leicester Tigers into battle.

Then he walked under the main stand and into the “sheds” to witness a worn down pack of Northampton heavies, already badly banged up from the opening rounds of a so far successful domestic season, in no shape to cope with Leinster’s international standard resources.

“Well, I wasn’t privy to their changing room but I looked at our guys at half time and it looked like a bit of juice was taken out of their legs,” said Boyd. “At the end and they scored three tries. For two of those three tries I don’t think we missed a tackle.

“It’s a learning for us that there is another level of physicality and fitness required if we are going to compete at any stage with teams like Leinster.”

The former Wellington Hurricanes coach took a very long pause when asked if the Saints can ever reach and remain at the Leinster standards.

“We have to be optimistic that we can. When you play them very best teams in Europe – which Leinster certainly is – and I am not making excuses here, but when you have Owen Franks, Courtney Lawes, Dave Ribbans not available, those guys can make a difference to where the root of the problem is.”

The squads capable of winning the Champions Cup are an elite group of about three or four French clubs and one Irish province, Boyd explained, with the only England club expected to match this level currently recovering from a £5 million fine for breaching salary cap regulations.

“We faced a similar but different thing last year in the Challenge Cup when we had Clermont in our pool. They play a completely different way, they pose a different problem but they just bring an enormous amount of physicality that you got to deal with one way or the other.”

Boyd will continue to build upon a local identity at Northampton but none of this can concern Cullen who took the opportunity post match to keep Devin Toner in the frame for Ireland selection.

“Dev has been fantastic,” said Cullen. “He has applied himself so well and you can see that he wants to get back into the national squad. He’s still hungry and we’re still trying to provide the platform for him to do that.”