Champions Cup may be expanded to 24-team tournament 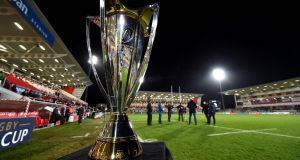 The Champions Cup organiser, European Professional Club Rugby (EPCR), is considering expanding the tournament from 20 to 24 teams as one of several one-off proposals for next season. The actual format for a 24-team Cup has yet to be fully thrashed out, but it would entail participating sides playing four matches in the group stages, possibly across eight pools of three, for example, with two-legged ties at either the quarter-final or semi-final stage.

Hence, this expanded competition would see a reduction in match weekends from nine to eight, a particular consideration for what is liable to be very a congested 2020-21 season due to the effects of the coronavirus pandemic. The current format sees 20 teams play in five groups of four.

The push for a 24-team tournament is very much French-driven in light of the French Rugby League (LNR) abandoning the 2019-20 Top 14. Ensuring its first eight sides of qualification, rather than six, for next season’s Heineken Cup would mean including the heavy hitters of four-time winners Toulouse (who lay seventh when the campaign was called off) and eighth-placed Montpellier.

The proposal may well find favour with the Pro14 and English Premiership as well, whether or not their 2019-20 campaigns are abandoned or brought to some kind of conclusion. As things stand this would enhance the qualification chances of both Connacht (currently fourth in Conference B) and the Dragons, as well as London Irish.

Declan Kidney’s side are lying eighth in the Premiership and are scheduled to be moving into their new stadium in Brentford next season.

An EPCR statement issued on Thursday said that ongoing discussions with its “league and union shareholders regarding new formats have included the possibility of a 24-club Heineken Champions Cup with eight representatives from each of Europe’s leading league competitions, played over eight weekends. If adopted, any new format would apply to next season’s tournament only on an exceptional basis.”

The statement also said that the organisers remain committed to completing this season’s Champions Cup and Challenge Cup, adding: “It is hoped that the 2020 finals could be staged on the 16th and 17th October.”