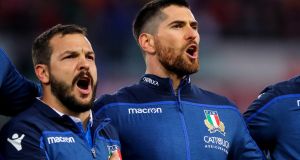 Ian McKinley (right) singing the Italian national anthem ahead of the Six Nations game against Wales in Rome in 2019. Photograph: Ryan Byrne/Inpho

Few Irish rugby players have a documentary made about them, but then again few have a story quite like Ian McKinley’s. Of course he’s an Italian now, and Look Beyond, which has been released on Amazon Prime, is a fittingly inspiring tale of his amazing recovery from losing his sight in one eye to rebuilding his rugby career to Test match level with the Azzurri.

Appropriately, it is also an insight into the remarkable McKinley family, his parents Pamela and Horace, older siblings Andrew, Philip and Emma, as well as his childhood sweetheart Cordelia, now his wife. For, truly, there would have been no such triumphant tale without their support and this is a story of his and their unflinching determination and resolve in the face of cruel adversity.

“I honestly don’t think of myself as a champion,” maintains the ever humble McKinley. “I think of myself as someone who just wants to give it their all, someone who knows that rugby is not there for the rest of your life as a player, so you’ve got to maximise your time, realise how fortunate you are to be in this position to be able to love doing what you’re doing.

“Just follow your passion,” says McKinley to camera, before adding with a smile: “And I don’t like losing.”

Never a truer word, for this was about his and his family’s refusal to accept defeat.

First shown to a packed cinema audience in Treviso before the current crisis, Look Beyond was produced by Andrea Morghen for Aurora Vision, and directed by award-winning Italian documentary makers Lia and Alberto Beltrami. They had complete access, and used it well, mixing training footage and interviews with McKinley in Italian and Benetton training camps along with footage from McKinley’s school, St Columba’s College, the family home in Whitechurch parish where Horace is a pastor, and the Interfaith Centre in Dublin City University where Philip is a chaplain.

As well as interviews with all his family, his coach, Paul Cron, and his housemaster, Liam Canning, at St Columba’s, the makers were also given access to grainy home videos dating back to when McKinley was a baby.

He is very much the youngest of four, with Philip – nine years older – the nearest in age. Philip vividly recalls the day he, Andrew and Emma were called away from watching Home and Away on television after family dinner to be informed by their parents that they would have a new sibling, and their “radically different responses”.

“My brother Andrew broke down, wept in tears and hugged and embraced our mother – he thought it was the most wonderful news. My sister I remember being a little more cautious but still very jubilant and me, I ran out of the house in utter disgust. I had been on the pinnacle. I had my throne as the youngest child and suddenly, after a long gap, this imposter was arriving to take my throne and I was in denial for quite some time.”

Yet no one would become more integral in McKinley’s rugby story than Philip. While Horace had played for Old Wesley back in the day, it was through going to Philip’s matches with St Columba’s than McKinley was first introduced to rugby and soon became besotted by it.

Canning talks about his and Pamela’s failure to make McKinley more interested in books than school, and ironically one home video shows a revealing introductory page to a schoolbook written by McKinley.

“My name is Ian McKinley. My favourite thing in the world is to be a rugby player. I am 12 years old. I am not the cleverest of persons in the world but I hope you like my book.”

His bedroom, which he used to share with Philip, is adorned with photographs of him meeting stars such as Mick Galwey and Felipe Contepomi, and various jerseys from his career, and scrap books.

After McKinley starred for Kilmacud Crokes in Gaelic football, Philip charts his younger brother’s rapid rise through the Leinster and Irish underage ranks to the Leinster academy and the Irish under-21 team as a courageous and gifted left-footed outhalf.

Then came, as McKinley describes it, the fateful day in 2010 “when my life changed”. Playing at inside centre for UCD against Lansdowne in the All-Ireland League, he trucked the ball up inside the first few minutes whereupon a team-mate’s boot stud caught him in his left eye at the ruck.

Watching from the sidelines, Philip recalls the journey by ambulance to the Eye and Ear Hospital where they were met by Pamela, who had been enjoying a lunch on her birthday with friends. It had been, McKinley reveals, the first game of his that she had ever missed.

“The eye was a stew,” recalls Philip, and although initially advised to rest for a year, McKinley was back playing within six months. However, lining up a conversion when playing for Leinster ‘A’ in 2011, he was alarmed when the ball became “really fuzzy”.

McKinley had developed a cataract and after two more operations then suffered a detached retina, so requiring surgery for a fourth time. “It was the most painful [of the four operations] but unfortunately the tear was three times bigger than what could be repaired so I lost complete vision in my left eye.”

McKinley began to rebuild his life by coaching the under-16s at a lower Italian division club called Leonorso in what he admits were tough days for him and Cordelia – the rock who stood by him in these darkest of days – as they learned a new language and a new culture without his dream.

On April 6th, 2015, when on a day trip to Trieste with Philip, he broke down in tears. Reading reports of Leinster’s 2012 Challenge Cup quarter-final thrashing of Wasps away the night before with so many of his underage contemporaries had been too much.

That was when Philip resolved to do something and sprang into action.

The documentary demonstrates how the McKinley family became his personal task force on the tortuous road back, through discovering a patent for eye goggles, having them made, trialling them and finally having them approved by the English, French and Irish unions.

There are interviews with Italian team-mates as the film takes us through McKinley’s second coming, as it were, through Viadana, Zebre and Benetton Treviso to the Italian national team, and his Test debut against Fiji in Catania in November 2017 with all the family present as he belts out the Italian anthem.

“I think very few people in his position would have even considered returning to rugby,” says Cordelia, “but his passion was so strong, and his character, that he just wouldn’t take no for an answer.”

This documentary flies by too quickly. Toward the end, Philip gives a eulogy to the concept of family. “Every human hits the storms of life,” he begins, before eventually concluding: “Every family is a documentary.”

True, but some more so than others.

Look Beyond – Lo Sguardo Oltre, is available on Amazon Prime.