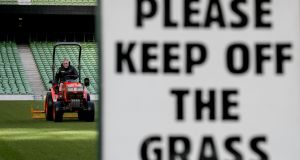 The November internationals can bring in up to €9 million in gate receipts for the IRFU. Photograph: Dan Sheridan/Inpho

The IRFU is a prudent, efficiently managed business under the guidance of chief executive Philip Browne and Tom Grace, the honorary treasurer and former PWC partner.

It is facing unprecedented losses in revenue due to the Covid-19 pandemic. Some 96 percent of revenue is generated by the currently inactive professional men’s game. If the November internationals and the Six Nations cannot be played in early 2021, losses could fall between €45 and €60 million.

The estimate is closer to €45 million if Test match rugby returns to be broadcast from empty stadiums in 2021.

Irish rugby’s sustainability is anchored to filling the Aviva stadium at least five times a year. The majority of the 50,000 tickets are sold to clubs in packages to ensure less attractive internationals also sell out.

The IRFU’s 2020 financial report is, presumably, being calculated without the €2-3 million gate receipts from the postponed Italy game in Dublin and prizemoney from the unfinished Six Nations.

The financial year ended in April with the accounts usually published at the Union’s AGM in July.

The timing also means the gargantuan losses in revenue of £107 million (€121 million), predicted by the English RFU if international fixtures are cancelled for the remainder of this year, will not be reflected in Irish rugby’s 2020 accounts.

The RFU, according the chief executive Bill Sweeney, expects to lose £85 million (€96.2 million) if rugby returns to Twickenham without supporters due to physical distancing rules. They are already reporting losses of £15 million, which are still set to rise to £32 million if November internationals are able to go ahead as planned.

“We don’t wish to enter into speculation at this time as we continue to work on plans, in conjunction with Government and our other stakeholders, to map out a return for rugby,” said an IRFU spokesperson.

The Irish Government has stated that professional rugby can resume on August 10th. However, Dr Cillian de Gascun, the virologist advising the Government, told The Irish Times that the safe return of team sports cannot be recommended “from a public health perspective without social distancing” or a vaccine for the virus.

The IRFU announced surplus income of €28.3 million last season but they were braced for a significant drop in revenue as the World Cup denied them three home Test matches in November 2019.

The Aviva stadium can earn up to €9 million in gate receipts from this end of year window. That much needed income in 2020 was vital to bouncing back from predicted losses incurred by the journey around Japan. With this year’s scheduled visits from South Africa, Australia and Japan increasingly unlikely, the Union’s financial situation can only be described as dire.

The Scottish Rugby Union expects to lose “well in excess of £12 million (€14.6 million)” if their three November Tests are cancelled.

Most businesses are in the “exact same situation” Browne added. “It’s maybe a little bit more extreme for sport because it’s literally like a cliff edge.”

Revenues grew to €87.5 million in 2019, an increase of €1.8 million on 2018 due to improved Pro 14 revenue, along with the sale of 10-year tickets and corporate boxes bringing in €4.3 million. This offset the previous year’s prizemoney of €2.6 million for winning the Grand Slam.

The Ireland’s senior men’s team accounts for 81 per cent of IRFU revenue. This includes ticket sales, hospitality, sponsorship and broadcast deals. Fifteen per cent is generated from the Pro 14 and European Professional Club Rugby, which means 96 per cent of the union’s revenues in 2018/19 came from the professional game.

“The remaining four per cent arises from the domestic game and other income including rents and affiliation fees,” wrote Grace, the former Ireland winger and current chair of the British and Irish Lions, in last year’s annual report. “The majority of the domestic game income is made up of the various grants that the union receives, principally from Sport Ireland and the government.” The Sport Ireland grant was €2.25 million.

Of the €84.2 million in expenditure, “player and management costs” amounted to just under €41 million. Scaled salary deferrals ranging from 10 to 50 per cent have since been introduced.

The IRFU did bank €25 million last year from the sale of 90 acres at Newlands Cross to property investment company Hibernia Reit. If the land is rezoned, from agricultural use to residential building, in the next 10 years the IRFU will be entitled to an additional payment of 44 per cent of the market value of the lands at that date.

The Union committee agreed, wrote Grace, that the “net proceeds from this disposal were to be applied for the ultimate benefit of the domestic game”.

Browne, when confirming the Newlands money was used to purchase number 10 Lansdowne Road, stated: “The reality is that those monies were used to buy the offices that we’re in as a long-term investment, and the rent that is saved would then be put into the domestic game on an annual basis, so at least we had a bankable asset.”

Grace signed off his report with a warning prompted by the winds of change now certain to visit the global fixture list.

“As in 1995, the game stands at a crossroads and we must ensure that we make the right choices to best serve the long-term future of the game in Ireland. Brexit and its potential impact also remains a significant concern as does player and coach inflation. In addition to this there are other significant uncertainties in the global economy.”