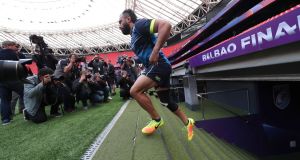 Given his durability and his versatility over two spells of five season and then three seasons, has to be considered the best overseas signing by any of the provinces, and perhaps even the best Leinster player in the pro era. Pound for pound, the Kiwi certainly gave value for money.

The Puma legend wasn’t registered for the Heineken Cup in his first season and was largely overlooked by Declan Kidney in his second.

But in the next four years he became the focal point of many of Leinster’s good days (and, ok, one or two bad ones). In just 30 Heineken Cup games he scored 342 points, including 14 tries. In 116 appearances in total, he accumulated 1225 points, including 33 tries, mostly from outhalf/

Not unlike Nacewa then. “And spirit,” adds Cheika. “He was a very instrumental figure in helping to build Leinster’s identity and their story. Felipe had an ability to join up the players off the field with his passion.

“I remember the day that his wife had their first baby, and we were playing the Borders in Donnybrook the next night. He’d been up all night and I said ‘mate, don’t worry about it’. He said ‘bullshit, I’m playing.’ I think he scored four tries and had cigars and champagne for everybody. It was classic. That boy knew how to put on a show, on and off the field.”

Aptly named. Carved out of granite. A one season wonder, it’s true, but what a wonder, and what a legacy. Played 21 of 23 games in that breakthrough 2008-09 season and was an ever present in the nine European games. Powerful carries, six tries, big hits, counter-rucking and a good lineout option, he was man of the match in the quarter-final, semi-final (when an early try saving tackle on Iain Dowling drew a line in the sand) and final.

“Rocky had a huge impact and it was a real shame that he didn’t stay on,” says Cheika. “A wonderful player and again had the ability to fit in with his character, and knew how to do the job the team needed.”

Another shrewd Cheika signing, the well-travelled, teak tough Aussie-born Scottish test lock hardly missed a game or a beat in his two seasons with Leinster, playing 46 games. An ever-present in the 2009-10 run to the semis and when regaining their crowd the following season, he scored his only Leinster try in the comeback win over Northampton in the decider.

That was his penultimate game. Forced out by the IRFU against his will, Hines’ departure left a void that was briefly filled by Brad Thorn and, of late, Scott Fardy.

Strictly speaking, the South Afriican born hooker long since ceased to be an overseas’ player, having arrived as a converted backrower from the Cheetahs and then qualified through residency three years into his nine year spell with the province. But in the second of those first three seasons, the diminutive, dynamic Strauss started all nine games as Leinster regained their European title with that comeback win over Northampton, and started all but two when they retained it a year later. Playing 154 games and counting before retiring at the end of the season only adds to his list of achievements.

Not even a half-season wonder, but again he left an indelible impression. Signed on a short-term contract by Joe Schmidt in March 2012, the then 37-year-old Thorn only played eight games for Leinster, but was a key man in the quarter-final, semi-final and final wins over Cardiff, Clermont and Ulster, so adding a European Cup to his World Cup and Super Rugby wins.

First onto the training pitch and last off every day, Thorn’s professionalism inspired the late blossoming of Devin Toner and many others.

The passing years judge the Australian scrum-half well. He played 59 games in his three seasons with Leinster, and 16 in the European Cup, where his value was such that this saw him playing the full 80 minutes in their last six games which culminated in that 2009 breakthrough success.

“Chris delivered exactly what that team needed at ‘9’ with a guy like Felipe outside him, and then Johnny in the semi-final and final,” says Cheika. “He understood service and was tough defensively, and a real team player. That’s why he’s turned into a quality coach.”

With a limited budget, Whitaker has guided Montebaun to the ProD2 play-offs in each of the last two seasons.

Lest we forget, the ebullient, hugely liked Cook Islands prop arrived as a short-term medical joker early in the 2006-07 season when the cupboard was fairly bare, but stayed five years. He established himself as a key pillar in that 2009 success, starting four games at loosehead and five at tighthead, when playing every minute of the knock-out stages bar the last 10 of the final.

Injured in the first-half of the 2010-11 season, Wright returned to appear off the bench in the semi-final and final wins over Toulon and Northampton.

“He certainly made an impact when you think how he arrived as a medical fill-in from nowhere and he built himself a niche through hard work. Stan was a soldier, a hard worker who turned himself into one of the best scrummagers in Europe. His willingness to accept a challenge and get on with it was why the players loved him.”

Still going too, with Oyonnax.

The articulate South African prop was in the veteran stage when he pitched up for the 2007-08 season, when only playing 16 games, but his presence was very significant in an important Magners League triumph which preceded the Heineken Cup a year later.

Le Roux helped to develop a strong mauling game and bringing a hugely positive personality to bear. “He had a good impact,” says Cheika “and was a mighty good squash player too. He gave me a lot of entertainment running around the court."

Leinster had gone through a dozen outhalves in the previous five years when Holwell arrived in October 2004, and after a difficult second night in the face of the Ospreys’ blitz defence, he adapted pretty seamlessly, unerringly landing his kicks, managing games, bringing in those outside him and generally making it all look pretty effortless.

In just 15 games, he scored exactly 200 points for Leinster, 104 of them in just seven Heineken Cup games, before making a brief cameo this season as a sub in the Magners League game at home to the Dragons and Castres in Europe.