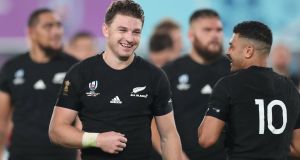 Beauden Barrett has accepted All Blacks stars will have to take a pay cut due to the coronavirus pandemic. Photograph: Billy Stickland/Inpho

New Zealand cancelled a string of this season’s lower tier provincial competitions on Monday “to help secure the future of the sport” after the coronavirus lockdown.

All rugby in New Zealand has been called off indefinitely because of the government measures put in place to halt the spread of the virus, which has infected 589 and killed one person in the island nation.

New Zealand Rugby (NZR) chief Mark Robinson said last week the game was “fighting for survival” after the intercontinental Super Rugby competition was brought a halt and plans to put on a domestic tournament in its place were scuppered.

Starved of match day revenue and television money, as well as facing the possible cancellation of the money-spinning July Tests against Wales and Scotland, NZR has cancelled all provincial competitions below the national championships for men and women.

The Heartland Championship, which features the 12 weakest provinces, the Jock Hobbs Memorial national under-19 tournament, the National Sevens Tournament and all other “Provincial Union representative rugby tournaments” have been axed.

“It’s surreal how much this has impacted everyone in just seven days and we’ve needed to act swiftly, decisively and together,” Robinson said in a statement.

“We are united in what we want to achieve and that’s to secure the future of rugby.

“These decisions have all been about ensuring when the time comes our communities can be up and running club, community and school rugby as quickly as possible.”

A decision on whether to hold the national provincial championships would be made at a later date, the statement said.

Rugby is New Zealand’s national sport but even with the huge success over the years of the All Blacks national team, a relatively small domestic market means the game has often had to survive on a shoestring.

All Blacks coach Ian Foster and his staff have taken pay cuts and twice World Player of the Year Beauden Barrett confirmed at the weekend that the top players would soon be following suit.

“As an employee of New Zealand Rugby, we’re all facing some tough times and we’re all in this together,” the All Blacks back told Newstalk ZB radio.

“As players we’re working through that with ... the Players’ Association. That will come out in due course, but yes we will be at some stage,” he said of pay cuts.

1 Connell losing touch with the club championship is the real tragedy of Normal People
2 Ghosts and goalposts: The soul of street football in Dublin’s Gloucester Diamond
3 Gerry Thornley: Coronavirus crisis could be terminal for Ireland's rugby clubs
4 Shane Ryan: Shark attacks and gruelling shifts on a Covid-free Atlantic mission
5 Sideline Cut: Vignette shows why Bird is the true shark in The Last Dance
Real news has value SUBSCRIBE