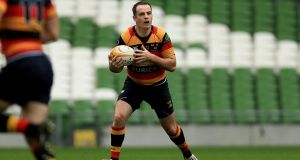 Lansdowne’s Scott Deasy: trails Con’s Tomas Quinlan by a single point at the top of the scoring charts (165 to 166). Photograph: Donall Farmer/Inpho

There are four heavyweight contenders in Sunday’s Division 1A semi-final line-up, with Lansdowne and Clontarf, who have shared the trophy over the last four years with two wins each, facing off against Bateman Cup kingpins and last season’s beaten league finalists Cork Constitution and Young Munster who have reached this stage for a third year in a row.

Having lost the 2016 decider in dramatic circumstances, Cork Constitution have very much looked a team on a mission this season, winning five of their final six games to reach the last-four. They will also return to Dublin for next Saturday’s Bateman Cup final against Old Belvedere.

The 2013 and 2015 league champions, Lansdowne, who got back to winning ways against Garryowen last week, lie in wait on Sunday, looking to make the most of home advantage and the guile of former Temple Hill favourite Scott Deasy, who trails Con’s Tomas Quinlan by a single point at the top of the scoring charts (165 to 166).

Lansdowne’s backs, including the division’s leading scorer Daniel McEvoy (11 tries), have been the more potent force, but this clash is likely to be decided up front. Constitution won the sides’ two previous meetings this season, their 25-20 triumph on the Dubliners’ artificial pitch in March including lock Brian Hayes’s third try in as many games and a defiant late defensive stand.

Hayes and Conor Kindregan are the league’s most prolific secondrow pairing, with 10 tries between them, but the Ian Prendiville-led Lansdowne frontrow has been just as influential, picking up a number of penalty tries via their powerful scrummaging. That could be a decisive area with Con missing the Munster “A”-tied Rory Burke and Liam O’Connor.

An equally tight encounter looks likely here. Only scoring difference separated Clontarf and Young Munster in the final standings, with Young Munster notably claiming a brace of regular season wins over the reigning champions (20-18 at home and 13-11 at Castle Avenue).

Young place-kickers David O’Mahony and Alan Tynan shone in those matches, the latter nailing a decisive late drop goal away to Clontarf, and the Tipperary starlet will relish another outhalf duel with David Joyce, the league’s Rising Star of the Year award winner in 2014.

Munster have suffered narrow semi-final defeats these past two seasons, going down to Lansdowne and Cork Constitution, so will it be a case of third time lucky? Of huge frustration is the scheduling clash with the British & Irish Cup final which has five Young Munster players involved for Munster “A”, including centre duo Dan Goggin and Cian Bohane.

Clontarf coach Andy Wood is well used to getting his side to peak at play-off time. The scoring form of the likes of Conor O’Brien, Michael Brown and Michael Noone, who have tallied up 10 tries between them in the last six rounds, suggests that they will be playing for a third league title in four years on Sunday, May 7th.