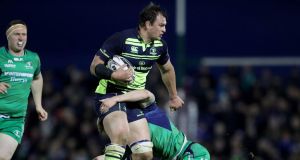 Rhys Ruddock led from the front in Leinster’s 37-24 win over Connacht in last Saturday night’s thriller in the Sportsground. Growing into the match, he made 12 carries, 13 tackles and scored a try. He is fit and well, which is just as well, as up to now injuries have meant that in his seventh season with the province Sunday’s European Champions Cup semi-final against Clermont could, finally, be his first.

He looks sure to be involved, but then again even without the injured Jamie Heaslip, the Leinster think tank will have to perm three from Sean O’Brien, Jack Conan, Josh van der Flier, Dan Leavy and Ruddock. It could be that three will start and the other two will make it to the bench, given Ruddock can also cover secondrow, but then again so does Ross Molony.

The Leinster coaching staff have tended to particularly value Ruddock’s physicality against French opposition. Ten of his 28 European games have been against Top 14 opposition.

“Yea, always playing French sides it is part of the game where they pride themselves on, and probably where they see a strength of theirs,” says Ruddock. “Especially when you go and play them in France, they seem to back themselves up front and will target us there.”

“We’re well aware of that, but when you look at Clermont as well and the way they have been playing this year, they are capable of a lot more than that. They’ve got so many options and threats that I don’t think it will just come down to that forward battle, but being able to compete with them physically and get on top in areas up front will definitely make for a solid platform for us to play and bring the battle in the rest of the game. So it’s definitely going to be a key area.”

Ruddock describes them as a well-coached, well-drilled team – hardly surprising given their forwards coach is the Ulster-bound Jono Gibbes, whose seven seasons with Leinster embraced their golden era of three Heineken Cups and a Pro12-Challenge Cup double. “It’s hard to pick apart one specific flaw,” admits Ruddock.

This is also new terrain for the vast bulk of this Leinster team. Of the starting XV that beat Clermont in the 2012 semi-finals in Bordeaux, seven have retired, two are injured and one is suspended, with only three or four set to start on Sunday and, at most, eight of the 23 that day being on duty in Lyon.

Yet Ruddock maintains: “I think we have enough experience in the coaching staff and the player group of guys who have played in the big games in Europe, and won in big games in Europe. In France there will be enough guys who take the field this weekend who have won in France in quarter-finals and semi-finals, so that is massive and I think something that you need when you’re going to play such an in-form team in such a tough environment, and on such a big stage.”

Since the arrival of Stuart Lancaster, Leinster have already more than doubled their entire tally of tries from last season, and will again back their fitness in seeking to play to a high tempo.

“Yea, definitely,” vows Ruddock. “We feel like we’re fit, and as I said, the rotation and strength in depth, the fact that guys haven’t played, or that one team hasn’t played a huge amount of rugby, we’re all feeling fresh and the guys who are fit are not just fit in terms of injuries, but actually well-conditioned.

“So it’s probably going to be very fast and furious but I think we’re in a good place to play at that level, and you have to be when you’re playing against any of the big teams in Europe, especially one that can throw it around and play some rugby. Hopefully we’re fit enough to play at that level.”