Andy Farrell says none of these Lions will accept second best 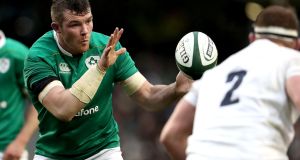 Peter O’Mahony: “Everyone knows there’s a performance like that in Peter. He’s a top professional,” said Andy Farrell about the Munster man’s selection for the Lions. Photograph: Dan Sheridan/Inpho

No one is better equipped to be the Lions’ defence coach than Andy Farrell.

He completed a four-year cycle in the same role with England and ditto for the last 12 months with Ireland, during which time both beat the mighty All Blacks, not to mention the Lions series win in Australia four years ago.

So you believe him when he concurs with Warren Gatland that this is a stronger squad than four years ago, and that selecting the squad was a thorough process, with one question superseding all others.

“You’d look at it and the first remit for us all was: ‘Who’s going to accept being second best?’ And I don’t see anyone that wants to be second best. I see competitors who are not going to accept not being in the starting side and we’ve got a squad of 41 like that.”

In other words, a player’s character was as significant as his ability, albeit their character, individually and collectively, is liable to be tested like never before.

“Yeah. You know what, you can actually say here and now that we believe that that guy has the right character and that guy has, the whole squad of 41 has, but it’s about the feel of the here and now when you’re on tour. That’s the important part because we know that it’s going to be taxing. We know there’s going to be all sorts of emotions, ups and downs, and who can deal with it.

“Who can deal with a lack of sleep at the start? Who can deal with the travel, with preparing themselves the best they can to train properly and then, when they get the chance, who can deal with performing? That creates or breaks character along the way as well. That’s why I don’t think you can judge too much until those sort of permutations start to happen.”

Viewed in that light, when Ireland backed up their November wins over New Zealand and Australia by beating England on the final Six Nations weekend, it appears to have had a fairly profound impact on the selection.

That said, Farrell sought to play down its importance.

“Again, character does come out but it’s obviously not just on one game. It can flow you one way or another if there’s a sticking point but it’s never just over one game and nor should it be.”

Nonetheless, it’s clear that Peter O’Mahony would not have forced his way in otherwise, and the same probably applies to Iain Henderson.

“Everyone knows there’s a performance like that in Peter,” reflected Farrell. “He’s a top professional and a guy that’s been unlucky with injuries in the last period of time. You could see a build-up through the Six Nations of Pete being fit and then he had a little hamstring tweak which sat him out for a week or two. Then he was on the bench before he got his spot right at the last moment. He was ready to perform because of the preparation and how diligent he’d been throughout the whole of the Six Nations.”

“He was fantastic in making sure that the team prepared properly, to be the best that they could be and he was selfless in that preparation and I think that helped him in his own preparation to be right for the full 80 minutes.”

That two of the Tests will be in Eden Park, where the All Blacks have won their last 36 matches prompts him to declare: “That makes it brilliant.”

Reflecting on England’s 2014 tour and Ireland’s two meetings with the All Blacks in November, he stresses how the latter will improve as the series progresses and hence, the Lions will need to as well.

Farrell and co will look on at this weekend’s European Champions Cup semi-finals and the remainder of the season with interest, and with fingers crossed. Having cut his teeth as a coach first with Saracens, he is in a good place to call Saturday’s first semi-final, but simply cannot.

“Saracens have been masters over the last period of time of playing the game in front of them, no matter where they’re playing, but I’m sure they’re aware of the army of red that’s going to come to the Aviva and a Munster side that is bang in form at this moment in time.”

“I wouldn’t call it, I definitely wouldn’t.”