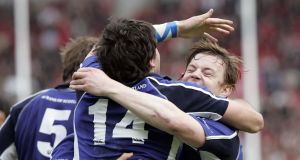 This showed Leinster rugby people that anything was possible. The champions felled in their own city, where no visiting club had won a European tie for six years, and while Michael Cheika’s first season in charge was brought crashing to earth by Munster at Lansdowne Road a few weeks later, the blue brand took flight here. The majesty of Felipe Contepomi had a long-maned Brian O’Driscoll cutting in for the first try before the killer blow was landed near the hour mark. Again, it was the Argentinean outhalf’s ability to notice that Denis Hickie was shadowed by a prop (Omar Hasan) and a lock (Fabien Pelous) close to the Leinster try-line. Ninety metres later Hickie had combined with Gordon D’Arcy and held off Vincent Clerc for a stunning score that secured a great day for Leinster folk (even the absent Lunster-ites).

Well, everyone except Trevor Brennan.

Clermont have not forgotten. It won’t be lost on Aurélien Rougerie and Morgan Para that Leinster journey to Lyons this weekend without Cian Healy, Seán O’Brien, Jamie Heaslip and Rob Kearney. All four played instrumental roles in this epic victory; Kearney breaking the line for Healy’s try while each and every Leinster man played his part in a manic defensive effort at the finish. The assault on Leo Cullen by Julien Bardy with the clock at 81.10 should have resulted in a massive suspension but it didn’t matter as Brad Thorn’s head-first tackle and O’Brien’s textbook latch secured the penalty on their own line.

Before Munster and Saracens, Leinster provided the first obstacle for Mourad Boudjellal’s Galacticos en route to their second of three successive European titles. It also marked O’Driscoll’s last European game. Toulon barely even noticed the loss of Jonny Wilkinson as Matt Giteau slipped into the role with the result never in doubt when Xavier Chiocci powered over early in the second half. Drew Mitchell drove in the final nail but really Leinster were dominated throughout at the breakdown by Steffon Armitage, Juan Smith and Juan Fernández-Lobbe.

The second season of Sexton’s exile ended in agony that Ireland’s outhalf may have ensured Leinster avoided. A Jimmy Gopperth drop goal miss in the 78th minute denied them a famous victory after Ian Madigan’s huge penalty had levelled matters up at 12-all. Madigan would leave another imprint on the tie, flinging a long skip pass on half way that Bryan Habana intercepted to race clear for a 10-point lead Leinster were never going to catch, especially when Gopperth failed to convert O’Brien’s try. Some turnover since as only Fergus McFadden, Seán Cronin and Devin Toner remain in the starting XV.