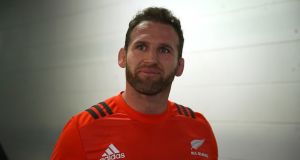 Captain Kieran Read returns to the New Zealand team as coach Steve Hansen on Thursday named his strongest available side for their last Test in the Rugby Championship against South Africa in Pretoria on Saturday (4.05pm Irish time).

Read, who had back surgery last year, had been allowed to miss last week’s 35-17 win over Argentina in Buenos Aires, instead travelling directly to South Africa and avoiding part of an arduous two-week trip.

In his absence New Zealand clinched the Rugby Championship for the third successive year, but will be determined to finish with an away win over the Springboks, who upset them in Wellington 36-34 last month for a rare blemish on the All Blacks’ record in the southern hemisphere competition.

There are three other changes from last Saturday’s starting side with first choice Aaron Smith returning at scrumhalf, veteran Owen Franks back in the frontrow and Jack Goodhue getting the nod over Ryan Crotty at centre. Crotty, TJ Perenara and Ofa Tuungafasi drop to the bench.

There had been some speculation that Hansen might continue with some experimentation now that their World Cup opener against South Africa is less than one year away.

The selection, however, is a clear signal that the world champions want to restore their dominance over the Springboks at a sell-out Loftus Versfeld on Saturday.

“Test matches between the All Blacks and Springboks are always intense and dramatic contests, and we expect this weekend will be no different,” Hansen said in a statement.

“It’s a Test match that everyone in New Zealand expects us to win. The fact that it’s an All Blacks-Springboks Test match makes it even more exciting and it’s one that we’re really looking forward to.

“South Africa are playing with a lot of confidence and after their two recent wins, their confidence levels will be even higher. So we’ll need to respond with real purpose, composure, belief and intensity.

“While our preparation this week has had to be slightly modified because of our travel, it has still been thorough, which should put us in good stead for Saturday.”

South Africa have drafted number eight Francois Louw back into the team after an emergency call-up as one of three changes for the game.

Louw, 33, had gone back to play for Bath in the English Premiership after featuring for the Springboks in their opening four matches of this year’s Rugby Championship.

Yet he was recalled for the last game of the competition against the world champions after Warren Whiteley suffered a training-ground injury.

He played for Bath last Saturday and then flew out to rejoin the South Africa squad.

Sikhumbuzo Notshe started at number eight in last week’s 23-12 win over Australia but has been dropped to make way for Louw, whose experience is preferred in order to counter the return to the New Zealand side of Read.

Mtawarira started last week against Australia in Port Elizabeth with Kitshoff replacing him in the second half.

Damian de Allende has overcome a shoulder injury and returns to centre in place of Andre Esterhuizen.

“Damian has trained very well and took full contact this week, so he is ready,” said Erasmus. “Notshe played well against the Wallabies last weekend and will offer us something different when he goes on, but Flo [Louw] has a lot of experience and is good on the ground.”

1 Cheltenham faces criticism after racegoers suffer Covid-19 symptoms
2 Andrew Conway diary: In search of a competitive edge
3 Whole new ball game: Sport will be last duck in the row in return to normal
4 My favourite sporting moment: Shels finally make all the heartbreak worth it
5 Avoid the treadmill at all costs – marathon training in the 2km radius
Real news has value SUBSCRIBE