Megan Goddard leads side to victory over Munster at Thomond Park 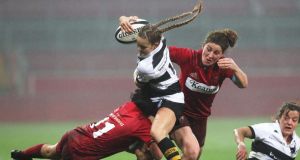 The Barbarians women’s team sparkled on their first ever outing in the famous black and white jersey on Friday as Megan Goddard proved the star of the show at a cold and wet Thomond Park.

Irish international Ailish Egan scored for the Baa-baas in the second half, while Nora Stapleton was involved in Georgina Roberts’s late try, one in true Barbarians fashion.

They led 7-0 at the interval after an open first half where both sides attacked from deep, and used their width, despite the treacherous playing conditions and slippery ball.

New Munster head coach Laura Guest had her full complement on offer, with the club sides allowing their players to be released for the game.

Munster were dominant in the opening stages but handling errors cost them dearly, while Barbarians had chances too, with openside flanker Rachel Taylor having an influence throughout.

Their first try came shortly before the half hour when lock Lenaige Corson was held up over the line. Munster were well beaten at the scrum and a penalty try was awarded to Barbarians.

Munster had one last chance to score before half-time but Chloe Pearse infringed during a rolling maul after Dinah O’Mahony fielded a lineout and Munster drove up field.

It was 7-0 at half-time and Munster made wholesale changes, while half-time replacement Egan crashed over in the 64th minute.

Goddard kicked the conversion but she missed with her second attempt at the posts after Roberts had scored five minutes later.

That move began with Christelle LeDuff down the left wing, and she combined with Stapleton, who provided the brilliant assist in typical Barbarians fashion.

Replacements: A Egan for Garnett, G Roberts for Shiels, A Thornborough for Jackson (all 40 mins), N Stapleton for Evans, E McMahon for Brown, B Essex for Riely (all 48 mins), T Rosser for Jensen, T Balmer for Coghlan (both 54 mins), A Garnett for Cripps (67 mins).

Kildare chairman calls on government to remember importance of sport 05:41
Stuart Lancaster knows Leinster’s strength in depth will be key in busy schedule 05:30
Corofin’s quality won’t have chance to shine on biggest stage 05:00
Heroic insanity: When Michael Dunlop raced home in memory of his father 05:00
Gerry Thornley: Consistent trailblazers New Zealand once again ahead of the posse 01:00
Crossword Get access to over 6,000 interactive crosswords