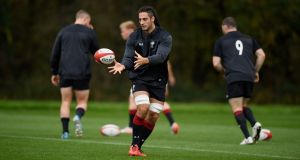 Wales debutant Josh Navidi trains ahead of their match against the Australian. Photograph: Getty Images

Wales are determined to begin a two-year World Cup countdown on Saturday by ending their dismal run of defeats against Australia. The countries will square up as 2019 World Cup pool rivals in Japan, and Australia currently boast a 12-Test winning sequence that began eight years ago.

A new-look Wales team – one that contains three home Test debutants in wing Steff Evans, centre Owen Williams and flanker Josh Navidi – is charged with starting to redress the balance as they take on Australia minus injured British and Irish Lions Sam Warburton, Justin Tipuric, Rhys Webb and George North.

“Two years away (to the World Cup) is a bit far away to be looking,” Wales assistant coach and forwards specialist Robin McBryde said. “However, it is always nice to win. We want to get that scalp we have been looking for. We know we have not got a great record against Australia, so the more times we get to improve on that record before the World Cup, the better it will be.

“We need to be clinical and bring that edge about us. I am not happy to just rely on a good performance. We need to get that result to get that next step forward.”

While much has been made of Wales’ fresh approach of fielding two midfield playmakers in Williams and outhalf Dan Biggar, they also know the basic set-piece rudiments have to be right. And McBryde called upon the services of 58 times-capped former Wales hooker Garin Jenkins to address the players on Thursday night.

“I know there is a lot of talk about attack and defence, but it starts with the front-five,” McBryde added. “It’s going to be a big challenge for us against an Australian pack that has really built momentum with (Mario) Ledesma’s input with regards to the scrum. They are very efficient in that area. I just thought some words of wisdom from Garin would stand us in good stead, and he was excellent last night.”

If Wales beat Australia at the Principality Stadium, it would also end a 15-year period of losing their opening autumn Test.

“I wouldn’t say we have done anything specifically different,” McBryde said. “There has just been a different feel in the squad because of the number of new faces. Some senior players are doing a different role, and are imparting a bit more of their knowledge on the back of a successful summer with the Lions.