Age question getting a bit old for warhorse Rory Best

Ireland captain knows South Africa will be a test of his leadership, performance and nerve 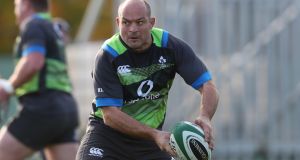 Sometimes it seems Rory Best is all too fundamentally steeped in rural decency to be playing hardball with the media.

Alone behind the large desk in the Aviva interview room, an empty stadium above after the captain’s run and all the physical work complete, on the day before Ireland face South Africa, it feels that the Irish captain should be massaged, not keelhauled over his age.

Best has grown comfortably into that image of a venerable warhorse, an immovable object in the Irish front row and always, at least in his public utterances, a font of straight-talking Poyntzpass sense.

He will take to the pitch against South Africa with just 80 minutes’ rugby in his legs, a little light, he thinks, but because the bulk of them came against Leinster, they may be worth more to him than that.

But as rugby careers revolve around four-yearly cycles, the 35-year-old, still finding the captain’s role agreeable, faces insinuations of the bearded man with a scythe and hourglass. Thoughts turn to a Tokyo captain for the 2019 World Cup.

“Look, I understand why people want to talk about my age. It’s not really something I’m interested in,” he says.

“Joe asked me to captain the side again for this season and I’m very happy to do it. Until I feel that my body starts to let me down . . . The hamstring injury can happen to anyone at any time.

“For me, when Joe asked me, that was it – dead and buried. So I suppose that’s something for the end of season.”

It is not an ideal conversation for Best to have on the eve of a match that is expected to test the character of the Irish team. But he understands that Schmidt posing the question to him to the backdrop of Johnny Sexton, Peter O’Mahony and Seán O’Brien was a vote of confidence in his honest, direct leadership.

Schmidt does not come with soft edges in making decisions that go to the heart of team matters. Onerous yes, but the captaincy is no burden to Best.

“It only becomes a burden when you’re looking around for people to share the load with you, share the burden,” he says.

“When you look through the spine of this team, you’ve guys who are growing into being leaders. Tadhg Furlong, Iain Henderson, Pete, Johnny, CJ, Seánie, Conor. Look at that spine in the middle of your team and all have captained at different levels.”

The words of Best are similar to those of Springbok centre Jesse Kriel and coach Allister Coetzee. Kriel on Thursday spoke of leading players, blindside Siya Kolosi, number eight Francois Louw and their captain Eben Etzebeth, all doers and thinkers on the pitch.

Kriel described the new team culture South Africa were building, with players handed the freedom of personal responsibility and a new regime of conditioning.

There was also grit in their ointment. Ireland is ranked four in the world, with South Africa a rung below. It is not in Springbok nature to be comfortable with that construct of rugby world order.

“I think it’s a good South Africa team. They’ve come a long way from the team we played a year ago last June,” says Best.

It is important that you have a plan as to how you are going to lead. Obviously, you have to have the ability to go to where you feel you need to go to

“If you think of vintage South Africa teams and these big forwards getting them across the gain line and a big-kicking out-half . . . These guys have those forwards and an out-half that can kick but they have a lot more as well. The depth they play at and the offloads . . . that makes them a real handful.”

There is a suspicion of “well, he would say that, wouldn’t he” in a week that has been less a war of words than a stew of mutual admiration between the sides, more a bromance than a face-off.

But cutting to the chase, his captaincy and leadership, his performance and his nerve will be challenged by the ’Boks.

“You’ve got to get your own game right,” he says. “Secondly, it is important that you have an idea as to how the week is shaped up.

“It is important that you have a plan as to how you are going to lead. Obviously, you have to have the ability to go to where you feel you need to go to.”

Best knows where he needs to go, as Paul O’Connell did before him.

“It’s a cliche and you’re probably bored hearing it, it’s about the game tomorrow,” he says.

Tokyo is a moot point. It can wait. The ’Boks will do for now.