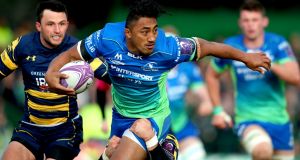 Following on from last summer’s tour to the USA and Japan, to all intents and purposes yesterday’s Ireland squad announcement continued the countdown to the World Cup. Those whose age profile or, in the case of Simon Zebo, his impending departure from these shores, counts against them have not made the cut.

Instead, barring injuries or other unforeseen circumstances, all those named should be around and in contention for the 2019 World Cup in Japan.

As ever with these things, when a squad of 38 is named, it’s as much about the losers as the winners, and there are plenty of both.

In joining Donnacha Ryan, Ian Madigan and Marty Moore in exile, Zebo is the most high profile. But for his decision to decamp to Paris, not only would he have been named in the squad but quite feasibly would have started at fullback in the Guinness Series opener against South Africa.

Rob Kearney, despite having played just twice this season and not for the last six weeks, is named, presumably on the basis that he is going to feature for Leinster away to Ulster tomorrow. Similarly, his brother Dave is included, even though the last of his three starts was four weeks ago. Given the absence of Jared Payne, as well as Zebo, the other big loser in the back three is Connacht’s Tiernan O’Halloran.

Were Rob Kearney not to prove his fitness between now and the first of the three Guinness Series against South Africa, the options would appear to be Andrew Conway or Joey Carbery.

It looks like time has been called on the Test careers of Andrew Trimble and Tommy Bowe, whereas their team-mate Jacob Stockdale is, as expected, in line to add to his two caps on the summer tour in a somewhat callow mix of outside backs. Apart from the Kearneys and Keith Earls, Stockdale and Conway are joined by the uncapped wingers Darren Sweetnam and, somewhat surprisingly, Adam Byrne.

Another notable and surprising absentee is Sean Cronin, given he is the most dynamic ball-carrying hooker at Ireland’s disposal, but he misses out to Rob Herring.

Maintaining the World Cup theme, the promising 21-year-old Andrew Porter – capped twice off the bench in the summer – is named ahead of Finlay Bealham, despite having started only one game this season, albeit he’s made four more appearances off the bench.

Ditto the upwardly mobile 21-year-old lock James Ryan who, along with another to win his first two caps on the summer tour, Kieran Treadwell are picked ahead of Quinn Roux. With Jamie Heaslip and Josh van der Flier ruled out, Dan Leavy, despite not having started a game since the opening weekend of the season, is included ahead of Jordi Murphy, with Jack O’Donoghue also missing out.

John Cooney has not done enough to elbow his way into the squad ahead of either Kieran Marmion or Luke McGrath, as for the first time in yonks Joe Schmidt and his fellow coaches could pick from four scrumhalves who are all starting for their provinces.

With Paddy Jackson’s season in cold storage, the options are not so plentiful at outhalf, where not surprisingly Ian Keatley’s form has earned him a recall, with Carbery another option as cover to Johnny Sexton.

Akin to the outside backs, the midfield has also seen a fairly radical reshuffle in the continuing absence of Garry Ringrose and Payne. Here, Robbie Henshaw has been joined by the recalled and in-form Stuart McCloskey – who won his solitary cap two seasons ago away to England in the Six Nations – and the uncapped duo of newly qualified Bundee Aki and Munster’s Chris Farrell. Rory Scannell and Luke Marshall, regular squad members who also played last summer, miss out.

In the press release confirming the squad, Schmidt commented: “In what we anticipate will be an incredibly physical Guinness Series plenty will be demanded of the squad. We have retained a core of experienced players but have also included a number of promising players that we hope will acquit themselves well.”

All told, true to form, Leinster are in their customary position as bulk suppliers, with 18 players, followed by 11 from Munster, six from Ulster and three from Connacht.

As is also true of these squad announcements, the bigger calls have still to be made, such as choosing between Jack McGrath and Cian Healy at loosehead, with Rory Best and Tadhg Furlong to complete the frontrow against the Springboks.

The secondrow looks like being Devin Toner and Iain Henderson, and all things being equal, Peter O’Mahony, Sean O’Brien and CJ Stander look like a starting backrow.

Conor Murray and Sexton will presumably, and hopefully, resume their halfback axis, with either Aki or McCloskey, most probably, vying to partner Robbie Henshaw in midfield. Earls is the one outside back nailed on to start at this juncture, quite possibly alongside Rob Kearney and Stockdale.