Connacht look to regain their rhythm against Munster 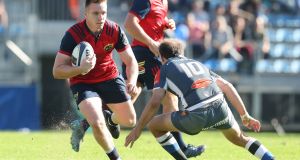 Munster’s Rory Scannell will be keen to prove a point after being omitted from Ireland’s squad for the Autumn Internationals. Photograph: Billy Stickland/Inpho

Momentum often provides an irresistible force in sport that galvanises a team. Connacht have struggled for playing rhythm and results this season in the Guinness Pro14 tournament, winning just one of six matches before being presented with a change of scenery in the European Challenge Cup.

Victories over Oyonnax and Worcester Warriors not only offered a respite and refuge from the disappointment, but injected impetus into a season that had stalled, or perhaps more accurately, failed to fire. The key for Kieran Keane and his charges is to use European success as a springboard to propel them forward in the Pro14.

There are still imperfections in performance terms – they should have won a great deal more comfortably against Worcester – but they grate a little less in victory than they do in defeat. Captain John Muldoon, Kieran Marmion, Ultan Dillane, Finlay Bealham, Tom McCartney, Tom Farrell, Jarrad Butler and Cian Kelleher return to the starting team.

There haven’t been any positives for the province’s shadow side, the Connacht Eagles, in the British & Irish Cup so far this season, other than the argument it provided Niyi Adeolokun with a competitive environment to accelerate his rehabilitation from injury. He starts on the bench.

The nature of interprovincial clashes assists in defining a pecking order in terms of the national side, and it’s reasonable to surmise that the announcement of Ireland coach Joe Schmidt’s 38-man squad for the November Test series against South Africa on Thursday afternoon will have added a rackful of spice to this match.

Munster fullback Simon Zebo has been omitted from the national set-up, presumably based on his relocation to Paris next season rather than current form.

For others who didn’t make the grade, this game represents a forum to respond. Rory Scannell has been excellent for Munster this season so this is a chance to measure his impact in direct or indirect confrontation with Bundee Aki.

Two of Ireland’s three scrumhalves for next month’s Tests, Conor Murray and Kieran Marmion, will be in direct opposition, the latter looking at the benchmarking process when weighed against one of world rugby’s most influential performers.

Connacht’s Tiernan O’Halloran and Finlay Bealham should feel a little miffed and that ought to be reflected in performance terms. Even amongst the respective benches there’ll be players bristling – Munster’s Jack O’Donoghue and Connacht secondrow Quinn Roux to highlight a couple. For all the individual considerations, there is a match to win.

Munster coach Rassie Erasmus has made three changes from the team that beat Racing 92 last weekend. Andrew Conway returns on the right wing in place of Darren Sweetnam, while prop John Ryan and secondrow Mark Flanagan are restored to the starting team.

The continued absence of hooker Niall Scannell (he missed the Racing match), who has undergone surgery on a thumb issue, means that Rhys Marshall retains the number two jersey in what Munster will hope is a positive omen as he scored the only try in last season’s corresponding fixture, a game the visitors to the Sportsground won 16-9.

The other standout player in that match was Ian Keatley, who tormented his former teammates, kicking two penalties, a conversion and a drop goal. The teams, from what was a horrendous night weather-wise, are considerably changed; Connacht have eight survivors starting, Munster six. Conditions on Friday night are expected to be much more conducive to running rugby.

Connacht coach Keane believes that his team was building towards their two victories in Europe: “There has been constant improvement from the lads, which has been refreshing for us. It has become pretty clear to me these local derbies are really important to the players, and they have been putting their hands up because they really want to play, so it brings excitement. I am excited by the occasion as much as they are.”

The atmosphere will lend a passionate backdrop to an occasion that, despite the discrepancy in the league table positions and the intermittent performance flaws to date of the respective teams, should be a rollicking encounter, unflinchingly physical, but with two teams who shouldn’t be confined the middle third of the pitch.

If Connacht are to upset the bookmakers’ odds then the recent graph of improvement will need a sharp spike; therein lies the challenge.