Charles Piutau revels in licence to thrill at Ulster 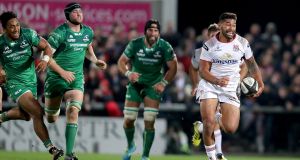 Munster won’t be the only province about to lose a game-breaking fullback in his prime next season, and with Charles Piutau also moving on from Ulster to Bristol the provincial scene will certainly be deprived of more than a little X factor.

Every time Piutau gets the ball there is a frisson of expectation in the Kingspan Stadium, and that’s usually because every time he gets the ball he makes something happen. If his outrageous footwork doesn’t beat a man, his pace will, or failing that, there’s always his strength, and then there’s his inventive passing game.

The stats don’t lie. For the last two seasons he has beaten more defenders in the pool stages than any other player – two seasons ago with Wasps and last season with Ulster. Last season in Europe he led Ulster’s count for tries (three), carries (65), metres gained (500), line breaks (nine), defenders beaten (28) and offloads (11). Apart from that, he didn’t do much.

Electric for the first two-thirds of last season, it was perhaps no coincidence that Piutau’s own decline in form came in tandem with Ulster’s dip in results. He just didn’t look right. But this season, revelling in his best position at full-back rather than alternating between there and the wing, he has been back to his brilliant best.

Take last week. Despite Ulster being beaten 41-17 in La Rochelle, Piutau was a constant source of inspiration, and made more metres (129), beat more defenders (six) and made more clean breaks (three) than any other player on the pitch.

He made 16 carries, passed five times and only kicked the ball once – when, after beating his man on the outside, he dropped the ball on the run on to his weaker left foot and grubbered through for Tommy Bowe to score. He clearly has a licence to thrill.

“Whenever the ball is around you always want to try and get metres,” he explained this week. “Yea, I am happy [with his form], but I’m always hungry for more, to improve, and I think I can give more for my team-mates out there on the field, not only in attack but also to the team defensively as well.”

After scoring nine tries in 23 games last season, he only has one this season, although that aforementioned grubber was his fifth try assist in six games. “I’m more than happy if I’m scoring or other guys are scoring. As long as we’re scoring that’s the main thing.”

The positives of truly world-class overseas players in the Irish system are manifold, and Jacob Srtockdale has been the prime beneficiary of Piutau’s creativity. The young winger admits he happily follows Piutau wherever he goes, on the premise that he will usually make something happen.

Piutau has no doubts that Stockdale is cut out for test rugby. “Definitely. We can all see, and you see him playing out there, how talented he is and how exciting it is every time he touches the ball. I’m very happy for Jacob and I definitely see a very bright future ahead for him, not only in this club but maybe internationally.”

Parallels between Piutau and Zebo don’t end with their positions and imminent departures. Piutau is perhaps the only New Zealander in his prime playing abroad who would assuredly be in the All Blacks’ shake-up, and even though he was still in the NZRU system, the decision to join Ulster probably cost him a World Cup winners’ medal. The final was on his 24th birthday.

He admits that was tough to watch, and although he was told otherwise, feels his intention to leave did contribute to his exclusion. Nonetheless, he maintains he has no regrets. He has vowed to make his farewell season a special on.

Of last week’s game he reflected: “I think we put in a good fight for about 50 minutes but then some individual errors let us down, and against good teams they make you pay for it.”

It was the biggest defeat he’s suffered in an Ulster jersey, and he admitted: “It hurts a lot mate. At times when you’re under the posts and trying to re-gather things and figure out how to change momentum, as much as it hurts, I think it makes you stronger as a team having gone through a tough time like that, and we’re hoping we can turn that around.”

Hosting Leinster, albeit with a six-day turnaround, could be the perfect antidote. Having played in six provincial derbies to date, including both of last season’s meetings with Leinster, Piutau is well tuned to their special status.

“You do notice in the build up that it’s a big week, and I guess for a lot of the players they know players in the other team really well as they’ve played together internationally for many years, and even on game night there’s always a bit more passion shown from the crowd knowing that it’s neighbours coming over to your home.”

Leinster are, he admits, the standardbearers, due to “the history they have, and even this season they’ve shown what they can do. They’re on a high coming in from the European Cup with two bonus [point] wins. So what bigger challenge and what better team to play this week than them?”