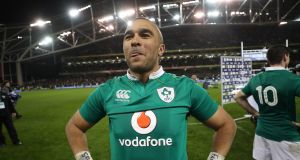 Simon Zebo has been left out of the Ireland squad for the November internationals after confirming his move to Racing 92. Photo: Inpho

Simon Zebo has been omitted from a 38-man Ireland squad for the Guinness November Test series against South Africa, Fiji and Argentina.

The 27-year-old Munster fullback, capped 35 times for Ireland, played in all bar two of his country’s 12 Test matches last season but his decision to take up a contract with French Top 14 club Racing 92 from next summer has prompted Ireland coach Joe Schmidt to omit him from the squad in keeping with the IRFU’s stated policy of favouring players who ply their trade at home.

Zebo has been in largely excellent form and that applies to his performances last season too for club and country. There is precedence in selecting players who chose to play outside Ireland, the most recent of which was Jonathan Sexton, coincidentally when the latter was playing for Racing 92, in whose colours Zebo will play next season.

There are four uncapped players in the squad – Connacht centre Bundee Aki, Leinster wing Adam Byrne, Munster centre Chris Farrell and his provincial team-mate Darren Sweetnam. Rob Kearney, who is currently sidelined, is included but there is no place for Garry Ringrose, Jared Payne and Jamie Heaslip, who are also currently injured or ill.

The 27-year-old Aki qualifies for Ireland on the three-year residency rule and attended an Ireland camp earlier this season. Ulster-born Farrell (24), Byrne (23) and Sweetnam (24) have been included in the squad while Dave Kearney, also hampered by injury this season, is chosen ahead of Ulster duo Tommy Bowe and Andrew Trimble.

Rob Kearney is selected ahead of Connacht fullback Tiernan O’Halloran, Ulster centre Luke Marshall loses out to Farrell, Munster centre Rory Scannell, outstanding for his province is unlucky to miss out, albeit acknowledging that Ulster’s Stuart McCloskey has been in brilliant nick. Ian Keatley wins a place as outhalf cover behind Sexton and potentially Joey Carbery, who will also be in the mix for fullback.

A number of outstanding young prospects who were capped on last summer’s tour to the USA and Japan retain their places in the national squad including Leinster tighthead prop Andrew Porter, James Ryan, Kieran Treadwell and Jacob Stockdale, all of whom are 21.

Porter gets in ahead of Connacht’s Finlay Bealham and Munster’s Stephen Archer; James Ryan and Kieran Treadwell have squeezed out Connacht’s Quinn Roux; while Leinster flanker Jordi Murphy’s versatility wasn’t enough to negotiate a way past a logjam of outstanding talent and in-form players in the backrow positions.

Ireland head coach, Joe Schmidt, said in the official press release: “In what we anticipate will be an incredibly physical Guinness Series plenty will be demanded of the squad. We have retained a core of experienced players but have also included a number of promising players that we hope will acquit themselves well.”