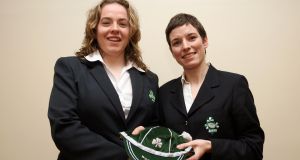 Philip Browne, the chief executive of the IRFU, has acknowledged the “union’s role in causing unintentional concern and confusion around the future of the women’s game in Ireland”.

On Monday, 33 players signed a letter sent to Rugby Players Ireland (RPI) mandating the representative body to act on their behalf following widespread alarm caused by last week’s IRFU advertisement seeking a “part-time casual” head coach of the national side on a “six month contract”.

A steering group co-chaired by Mary Quinn, the only female member of the IRFU committee, and Su Carty, formerly women’s development manager at World Rugby, will “review the current strategy for the women’s game and make recommendations about the direction of future strategies for the development and growth of the game in Ireland from the ground up”.

What that actually means is unclear.

Following complaints by the players about poor communication channels from women’s director of rugby Anthony Eddy, last night’s statement added: “Working in partnership with RPI, players within the women’s rugby programme will be among the key groups consulted and they will help shape the future direction of the game in Ireland.

“The work carried out by the steering group, allied with the review of the 2017 Rugby World Cup will contribute to building a framework for a long term strategic plan on the future of the women’s game in Ireland delivering into the next Rugby World Cup cycle and beyond.”

However, the World Cup review will not be released to the public or to the players.

There was no mention last night of upgrading the vacant coaching role from part-time coach despite the players, led by captain Dr Claire Molloy, strongly urging the union to make it a full-time position as “our Six Nations opposition, including Italy, have full-time coaches”.