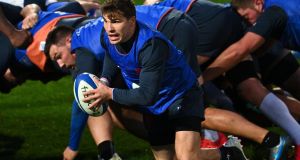 Antoine Dupont: France’s scrumhalf scored two tries, nearly had a third and was creator-in-chief of another against Wales last weekend. Photograph: Anne-Christine Poujoulat/AFP/Getty

It might sound contradictory given Ireland ran up a half-century of points against Italy last week while conceding two tries, but in many respects the defence was one of the main foundation stones for the performance.

Up against an incomparably more potent French attack on Saturday at the Stade de France (kick-off 8.05pm Irish time) if Ireland are to have any chance the same will have to apply again.

“Like every big game, it never changes,” said the Irish head coach Andy Farrell after confirming an unchanged side and match-day 23 save for promoting Robbie Henshaw in place of the injured Garry Ringrose and adding Chris Farrell to the bench.

“We’ve got to create our own chances by having a solid set-piece and having a defence that’s going to go after them and cause them some trouble along the way as well.”

The way Ireland ramped up their line speed against Italy looked like a trial run for this 2020 Guinness Six Nations finale, and the need is just as acute around the fringes as in midfield or the edges, particularly with Antoine Dupont in mind.

The French scrumhalf, along with his half-back partner Romain Ntamack, left-winger Vincent Rattez and tight-head Mohamed Haouas would have been ruled out of the scheduled meeting in March. Dupont’s performance against Wales last Saturday was a reminder that he remains the heartbeat, of this French team.

He scored two tries, nearly had a third and was creator-in-chief of another. When France opted to launch their one-off runners the depth and timing of their runs onto Dupont’s pass was hard to contain, and this, along with the threat which his own strength, speed and footwork provides, afforded his Toulouse teammate Ntamack another armchair ride.

”Wow, he’s some player isn’t he?” agreed Farrell. “And it’s not just him, they’ve got threats across the back row, they’ve got threats all across the back line but you’re right, Dupont, he’s a fighter isn’t he? He’s a winner as well. He’s not just got all the skill, he’s got the will to win as well and his strength is one of his biggest strengths. He’s a threat so he’s somebody that we’ve talked heavily about this week.”

Containing France’s physicality will be a primary concern for Irish fans but Farrell fervently believes his players can go mano a mano in the collisions.

“I believe in them, I believe they can front up and be dominant; I do, I honestly do. Yeah I suppose that’s the challenge ahead for every team that plays the game and we’re no different, I believe we can do that by the way that we’re going to play.”

France will reveal their hand this morning and it remains to be seen if the explosive Gaël Fickou-Virimi Vakatwa midfield partnership remains intact or if the former is moved to the wing and Arthur Vincent comes into the midfield.

To what extent Bundee Aki and Henshaw can negate the French midfield will hinge on the collisions closer in and the speed of the French ruck ball. Then they’d be a handful for any pairing.

“Yeah, you just can’t just be turning up and saying, ‘I’m going to be physical today’, you’ve got to do it collectively, you’ve got to work at a pace that allows you to dominate collisions,” said Farrell. “You’ve got to be connected together along the way in both attack and defence and they’ll be a massive part of the overall cog, won’t they, the centres? They always are.”

Then there’s the much-improved line speed and collective work-rate of the French defence under Shaun Edwards. He and Farrell go back a while.

“I was a young kid at Wigan, 14/15 coming through, and he took me under his wing for a spell,” admitted Farrell. “He was captain of the Wigan side and when I played my debut he looked after me – he certainly did. He showed me what professionalism was because he was ahead of his time as far as that is concerned.”

“I was privileged to be involved with him as a player. He’s a winner, Shaun. He’s a fighter. That’s why I know the French will be ready on Saturday night.”

Accordingly, Farrell does not expect to share a pre-match joke with Edwards.

The dramatic win in Paris two years ago marked James Ryan’s Six Nations debut since when the former Irish Under-20 captain has become one of the team’s leaders, a growth which Farrell began detecting earlier this year.

“Fast forward seven or eight months, he’s a lot more comfortable in that role with his lineout calling, with his forward pack and then with how he portrays his will to win to the rest of the group. That’s going in a brilliant direction.”

Recalling the “daunting task” facing Ryan two years ago, Farrell said: “I remember speaking to him the night before to say that ‘this will be just like any other game, when you walk across that white line you’ve got to make sure that you’ll be yourself’ and wow, he certainly was.”

“He was boy to man, wasn’t he, that evening? And I think he’s grown massive belief from that one performance that he belongs in this environment.”

1 Waterford turn Kilkenny upside down and inside out on way to All-Ireland final
2 Jim McGuinness: There is a way to save championship and make it competitive
3 Waterford’s frenzied waves of attacks too much for Kilkenny
4 Sordid murder of hurling brothers still resonates in south Galway
5 Klopp furious as injuries mount and VAR decisions prove costly
Real news has value SUBSCRIBE

Waterford’s frenzied waves of attacks too much for Kilkenny 21:49
Waterford turn Kilkenny upside down and inside out on way to All-Ireland final 21:43
Raphinha picks a fine time to break his Leeds duck in win over Everton 20:08
Andrew Mackin orders up a double as Louth drink in Lory Meagher success 19:10
Carla Rowe helps set Dublin up with a chance to make it four-in-a-row 18:47
Crossword Get access to over 6,000 interactive crosswords