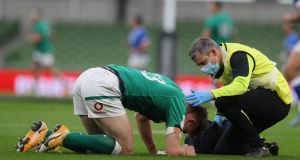 Ireland have been dealt a significant blow ahead of next Saturday’s tilt at the Six Nations title after Andy Farrell confirmed that Garry Ringrose has suffered a broken jaw.

The unfortunate first-half incident, when Ringrose was caught in the face by the left knee of Italian debutant outhalf Paolo Garbisi when attempting a charge down, is expected to sideline Ringrose for an estimated four to six weeks.

This maintains the cruel run of injuries to have inflicted the Irish midfield in the last few years and Ringrose, recently crowned both Leinster player of the year and Irish players’ player of the year, is thus liable to miss most if not all of the upcoming Autumn Nations Cup as well.

“Garry Ringrose has broke his jaw so bad news for us all,” said Farrell, clearly a little despondent about the news. “He’s been so good for us the last 10 days, he has been absolutely fantastic with his leadership and he was a big part of the reason why we got what we wanted out of today.”

“He was unfortunate with his thumb injury earlier in the Six Nations,” added Farrell in reference to the broken thumb he suffered in the opening win over Scotland, thus missing the ensuing games against Wales and England.

“Now he has come back and had a setback like that which will keep him out for four to six weeks so we’re gutted for Garry.”

While pleased overall with the performance and the win, Farrell admitted the team lost their way a little in the third quarter, and also early on when conceding the first of only three line beaks in the build up to Conor Murray being binned and Garbisi opening the scoring.

“You don’t plan for your ‘9’ getting sin-binned either so we struggled to get in to the start of the game as well. The game never goes according to plan, does it? You’ve always got to be patient, you can’t just expect to flow in the second-half, it’s never like that. I love the fact that we were patient and we still went after them defensively and created our own luck in the end.”

“I thought they was excellent. Superb. We asked them to be themselves and not just hope that things go well. You’ve got to create stuff and be yourself and back yourself and I thought every one of them to a man did that.

“Obviously Hugo and Will got to play the full game and their work ethic was fabulous. It’s what we would expect of them and what we see them doing week in and week out. It would be interesting to see Hugo’s GPS and Will’s tackle count. The energy that they gave the side was exactly what we wanted of them and for Ed to come off the bench and get stuck in, not just try to fit in and hope that things go well.

“Like I said before, they were being themselves and Jamo came on and hit a nice little kick over the defensive line. That was great. To see them all was great and they kept the continuity going. Great to get them all underway and I’m sure those are the first of many.

“It would be interesting to see the GPS of Hugo and the tackle count of Will. The energy that they gave the side was exactly what we wanted from them from the start.”

“That’s fantastic for them and it was fantastic from the lads coming off the bench to get stuck in. As I said before, they were just being themselves. Jamo came on and made some nice moments in the defensive line and his speed of ball was great, he kept the continuity going for us. So great to get underway. I’m sure it’s the first of many.”

Realistically, Ireland move on to Paris with an outside chance of winning the title, albeit sure of at least second place if they competed their fourth win out of five games and Farrell observed: “If we defend like we defended for most of that match we’ll give ourselves a chance.

“We talked about creating our own energy and our own atmosphere and all that comes from your work ethic and trying to win the ball back and I thought that was fantastic. Our line speed was great. Our collision work was very great and we’re just a little disappointed there to let them score that try.”

The preparations for this game were given an added pep by a relatively full-on 15-a-side training session last Wednesday, which also featured Keith Earls.

“Yeah that’s how we trained: 15 v 15 on Wednesday and there was a bit of contact in there as well. It was very competitive and, yeah, Wednesday, we tell the lads the team and we see what attitude and fight they’ve got to want to get over the disappointment and try to help the team,” said of the other squad members who weren’t picked.

“They’ve got to be team members, first and foremost and they are a big part of the resaon why we got the performance today.”

Reflecting on the past week and the resumption of the campaign after an eight-month hiatus, Farrell said: “Well, the bigger picture stuff is to get some meaning into next week and we certainly managed to do that.

“We certainly always want to be in with a chance in the last game to try and win the trophy. It’s a big old ask to go to Paris and try to win. Obviously the French have a fantastic squad and looking at the team that’s going to play (against Wales) tonight - I’m looking forward to that.”

It’s always a big ask to go and win there but we’ve started our campaign and we’ve got ourselves into next week with a chance. We’ve got a lot to fix up, which you would expect after week one but it puts us in good stead for next week as well.”

Wallabies fall short as they draw with Argentina in the rain 11:38
Emiliano Grillo storms into the lead in Mexico 08:36
Jim McGuinness: Cavan need illogical courage and variety to down the Dubs 07:00
Ireland retirement was ‘hardest decision’ for David McGoldrick 06:30
Matt Williams: Scrum stoppages turning rugby into a boring spectacle 06:30
Crossword Get access to over 6,000 interactive crosswords