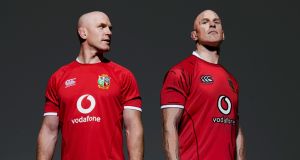 Paul O’Connell: ‘If Ireland can go to Paris, for the first time ever score four tries, get a bonus point and win the game it would give everyone [the] belief to kick on and stick at what they’re doing’

Paul O’Connell believes that if Andy Farrell’s Ireland team claims a Six Nations Championship title in the Stade de France on Saturday night, it will vindicate the shift in playing principles that the coaching team has championed since taking over from the previous Joe Schmidt-led regime.

“It would be a massive fillip for Ireland, particularly after changing over from Joe because he was an incredible coach who made an amazing difference, but there is a real contrast in how Andy and his coaches want to play,” said the former Ireland captain.

“So many of the methods that Joe used were successful and they are still capable of being successful, so to move in this direction while still having a good template in place was very brave of [Farrell and the coaching group] and the players as well. They [the players] seem to be enjoying the change and the change of attitude as well around the camp. It has freshened things up.

“If Ireland can go to Paris, for the first time ever score four tries, get a bonus point and win the game it would give everyone [the] belief to kick on and stick at what they’re doing.”

O’Connell, a Vodafone British and Irish Lions ambassador, speaking at the launch of the Official Lions Tour app, is adamant that the plan Ireland will take to Paris won’t “change whether they need four tries or not”. He’s noticed that since the 2016 win over New Zealand in Chicago, Ireland teams tend to kick long-range penalties to the corner.

I certainly think Ireland’s biggest strength is our smarts as rugby players. French players haven’t had that in the last few years

He elaborated: “They will probably end up taking some of the trickier kicks to the corner and if their maul is good, which it has been under Simon Easterby, they have a chance of scoring tries there. They’ll have a strategy which they will stick to but the way it is reffed will be important. Those two things are important for Ireland to win, that the ruck gets reffed and when Ireland kick to the corner, they maul well and they pick up scores from it.”

The former Ireland captain was impressed with aspects of the French performance in their victory over Wales last weekend, some of the back play, individual performances and their ferocity at the breakdown, but O’Connell still spotted some old Gallic failings. “They’ve more belief now than they had, have genuine systems in play in terms of how they exit out of their half and play now. They went 10-0 behind and 13-3 [against Wales] but came back quite comfortably to win the game.

“The ‘old France’ raises its head an awful lot, as it did against Scotland and at times against Wales as well. They do still give you opportunities whether it is in terms of penalties and general ill-discipline, or else from their defence and their back-field cover.”

O’Connell played against France on 16 occasions, finishing on the losing side on 10 of his first 11 matches, but after that there was a flip-flop in fortune. He explained: “Since 2010 the games have become technical and tactical and their emotion, flair and passion have not played as big a role.

“And I certainly think Ireland’s biggest strength is our smarts as rugby players. French players haven’t had that in the last few years; they’re getting better at it and investing in coaches, but they still give you good opportunities that we don’t give them.

While pointing out that he believed French secondrow Bernard Le Roux should have received a red card for his actions in the Welsh match, he singled out the South African-born player as a standout forward. O’Connell said: “I think Bernie Le Roux has been brilliant for them, his workrate, his rucking, his tackling, his fitness; the Top 14 doesn’t prepare players very well for international rugby but he upsets that trend.

“[Scrumhalf Antoine] Dupont is incredible, very unpredictable and very fast. [Romain] Ntamack has been very solid for them.[Gaël] Fickou is reborn; his footwork is amazing, he’s a brilliant passer and has become excellent at the breakdown. You can see the Shaun Edwards influence.

“A lot of the defending is done before you defend, so to speak, in the ruck, slowing the ball and putting teams under pressure. Guys like [Grégory] Alldritt, [Julien] Marchand, [Camille] Chat and Fickou are very good at it.

“The ferocity of the French play in terms of the breakdown [against Wales] was absolutely incredible to watch. A lot of it I thought was illegal but they are going to be very hard to win collisions against in every part of the game, at scrum, when we go to maul.

“I watch Racing 92 a lot because I am good friends with Mike Prendergast. [Virimi] Vakatawa’s been incredible for them. He is a big tall, man and with the tackler going lower it allows him to offload a little more. They are impressive across the board.”

In summation, France will offer opportunities; Ireland have to be good enough to take them.