Behind Closed Doors: Pandemic makes us realise how lucky we are to play sport for a living 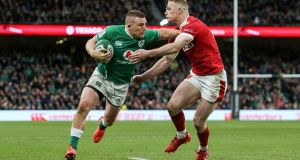 Andrew Conway on his way to scoring a try against Wales during the Six Nations. “It’s unfortunate that it took something like this to make us value it as much as we should.” Photograph: Gary Carr/Inpho

Like all my teammates that day, my last game was Ireland’s 24-12 defeat by England on February 23rd, five weeks ago.

Speaking to the media in Twickenham after the game, I said: “It is not the end of the season. It is not a final. We’re not going on our summer holidays. We have got the opportunity to put in a better performance in a couple of weeks. That is the beauty of the game.”

Well, that was the world we lived in. Seasons didn’t end in February. But the Italian game was postponed the following Friday and when we came into camp at the IRFU’s HPC in Sports Campus Ireland on the Monday before the France game, there were rumours that it would be postponed too.

But we had to assume that we were playing a Test match. Faz [Andy Farrell] made it clear that was the case, and we had a really good session. After it myself and Earlsy were doing extras when we saw a dozen or so management in a circle on the pitch. That didn’t look good.

We went into the changing room and Faz said it was 99 per cent off. Within ten minutes that was confirmed. We kicked a football around for a while, did a weights session, went out for a couple of beers and dispersed the next morning.

The following Friday the Pro14 was suspended, but soon you put everything into context, and suspending a rugby season doesn’t begin to be relevant. We take for granted things we have on tap daily, but this pandemic does make us realise how lucky we all are, especially those of us who play sport for a living. It’s unfortunate that it took something like this to make us value it as much as we should.

We’re privileged. I have gym equipment from Munster. We’ve been told to stay at home when there are other people who are doing the exact opposite for the good of everyone else. As someone said, a nurse and a doctor can save hundreds of lives but if the public stay at home we will save thousands.

I try to drag the morning out a bit. Make the breakfast and sit around the kitchen table for a while. Liz, my fiancée, is a community speech and language therapist, and is upstairs on a call now. It’s not ideal. It’s better to be face to face. Then again, for people working at home with kids it sounds pretty hectic.

I fill my day up with gym sessions. Munster gave me a wattbike, four sets of dumbbells ranging from light to relatively heavy, a bench, a 25 kilo plate, a kettle bell and a few mats.

Munster have sent us individual programmes and I got on to Damien O’Donoghue, our S&C coach, yesterday to fine tune mine. But this is week one, the easy end of it. I reckon by weeks five and six it’ll be tough.

We live in Castleconnel and coming into our house the first door on our left is the main living area. Then we have a double door which goes into the second room with a couch, coffee table, armchair and drinks cabinet. We’ve shifted that to one side and the armchair into the first room, making half a room into a gym of relatively good size which opens up into the back garden for some air.

Most mornings I do 20 minutes of what we call ‘quarry’ sessions, which target areas where you might be consistently tight, be it your calves, hamstrings or whatever.

In Munster this is your first port of call and from it you get a good feel of where the body is before high volume exercises. It can be stretching or rolling out tight muscles – it just opens the body up.

You feel great afterwards. It may take a little while to master. You might feel ‘I’m not really doing much here’. It took me years to really appreciate its value, but I couldn’t recommend it enough.

Obviously we’ve got some of the best S&C guys in the world, but for people who don’t have dumbbells I’d recommend ordering a foam roller and a hockey-style ball, and spending 15/20 minutes a day just cracking your back out, stretching, rolling on a ball that digs into your hips, your quads and your calves, and improving your general movement. With a walk every day everyone would feel the benefit.

Five days ago I turned on the TV for the overnight update, and it wasn’t working. Nothing worked. Eventually an engineer said I needed a replacement but the company I was dealing with was in Craigavon and the UK went into lockdown that night. A lockdown with no television was not going to be fun.

I contacted Jean Kleyn, a reliable source for anything and everything, and picked up a TV off him. It’s sitting on the coffee table in the front room as the old TV is mounted on the wall and I’m useless at DIY!

We only have Netflix for the moment, but that’s probably a blessing in disguise. You can’t hide from the news on the phones and the radio, but it’s more of an effort than hitting Sky News on the remote.

If anyone is looking for a good show on Netflix I’d recommend The Tiger King. It’s horrific viewing from an animal welfare viewpoint, but it’s about these insane characters that can only be produced in America, with their private wildlife parks. Cruel stuff. Tough watching. But, while in lockdown, just unbelievable entertainment.