All in the Scrum: Player welfare a key part of Ireland’s success 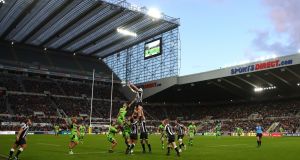 Jamie Heaslip and Johnny Sexton spoke last week on the importance of managing players and name checked England and France as two countries where players are at the mercy of the owners.

“It’s huge,” said the former Irish number 8. “I don’t think you can underestimate the system we have in place here versus the system that is in other countries... what’s actually even more important is that they control the training load of the player.”

Although Leinster had internationals Joey Carbery, Jack McGrath, Jack Conan and Sean Cronin playing against Ospreys, the front line Irish players who had a lot of pitch time during the Six Nations were rested before Saracens this week.

The Premiership side played six of their internationals against Harlequins. England duo Jamie George and Maro Itoje featured in the pack while Scotland and Wales backs Sean Maitland and Liam Williams were on the wings. Richard Wigglesworth reclaimed the nine shirt.

England playmaker Owen Farrell and lock George Kruis would also have lined out but were unavailable due to injuries picked up on England duty.

Newcastle enjoy a walk in the Park

Football impinged on rugby twice in recent weeks. Spain’s pain at losing to Belgium and attacking the Romanian referee after the match looked a little old school soccer.

A more kindly image was Newcastle’s decision to play their Premiership match in St James’ Park, home of Newcastle United FC. And it paid off as The Falcons attracted a crowd of 30,174 to the football ground.

The attendance dwarfed their previous record home crowd of 11,750, set during a Premiership victory over Bath at Gateshead in May 1998. More significantly, it was around four times bigger than the crowd they usually attract to Kingston Park and also three times more profitable.

There is a three-year agreement in place for Newcastle Falcons to play an annual Premiership game in St James Park.

“That’s a really deflating performance. There’s not a lot we can hang our hats on there or be proud of. The scoreboard isn’t a fair reflection of how utterly we weren’t in that game.”

Out of the sight line of Joe Schmidt, Ian Madigan continues to be front and centre with Pat Lam in Bristol. Madigan continued his mercurial form with the boot as Bristol edged past a valiant Yorkshire Carnegie at Ashton Gate on Friday. The Irish outhalf landed six penalties from seven attempts – including two in the final ten minutes - to fire Pat Lam’s side to an 18th-league win of the season and extend their lead at the top of the table.

It prompted a headline in The Bristol Post ‘Ian Madigan saves Bristol Rugby on a frustrating night against Yorkshire Carnegie.’ Madigan was joined in the game by Irish Under-20 forward Joe Joyce, who started in the secondrow.

Woke up this morning feeling Fife

It takes the fastest men in world a little under 10 seconds to run 100 metres. Dougie Fife may not have run the length of the pitch but he scored the fastest try in Pro14 history as Edinburgh extended their winning streak with a 29-22 defeat of Connacht at the Sportsground.

The Scots enjoyed a dream start with Fife scoring after just 10 seconds following a charge-down, eclipsing the league’s previous quickest try by Nathan Brew for the Dragons. It took Brew 18 seconds to touch down against Cardiff in December 2005.