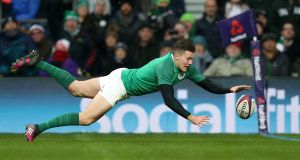 A third Grand Slam, 12 consecutive victories in the Test arena from the final match of the 2017 Six Nations Championship to the game that marked the swansong of the 2018 tournament, both coincidentally against England, ensured that it has been a remarkable calendar year for Irish rugby.

The Ireland trophy cabinet now contains, the Six Nations trophy, the Triple Crown salver, the Millennium trophy, the Centenary Quaich, the Admiral Brown Cup and the Lansdowne Cup – the Australians will be keen to reclaim the latter in the three Test series during the summer – a remarkable achievement and in the process Joe Schmidt’s side have moved up to second in the world rankings.

The accolades are not just confined to the collective as there have been several outstanding individual achievements and none more so than that of Ireland’s captain Rory Best, who is one of two players in Irish rugby history – Rob Kearney is the other – with a brace of Grand Slams (2009, 2018).

No other Ireland captain can include a box-set of victories over the world’s elite, New Zealand, Australia, South Africa, Argentina, England, Scotland, France, Wales and Italy.

A popular leader, he was also mentioned in dispatches in one particular category in the 2018 Six Nations standings. Best threw the ball in to more lineouts (59) than any other hooker in the tournament, playing all five matches, and his percentage success-rate (92) was only marginally off England’s Dylan Hartley (94 per cent) who led those stats, albeit having played four matches and throwing in to 15 fewer lineouts.

As befits a team that won all five matches in the tournament, Ireland players lead several of the categories and perhaps it’s easier to start with those in which one of Schmidt’s charges didn’t finish first.

French scrumhalf Maxime Machenaud (50 points) – he had a market leading 90 per cent success-rate of the front-line placekickers in the tournament – was the top points’ scorer in the 2018 Six Nations, one clear of Leigh Halfpenny and six ahead of Ireland’s Johnny Sexton.

Scotland fullback and the 2016 and 2017 Six Nations Player of the tournament Stuart Hogg accumulated more metres than any other player (479) and also led the way with offloads (nine) while his compatriot Jonny Gray was the only player to make 100 tackles. The secondrow generally leads that category in any match that he plays, club or country.

Stockdale’s seven tries was a Six Nations record – England’s Cyril Lowe and Australian-born Scottish international wing Ian Smith both scored eight in previous incarnations of the tournament – and the 21-year-old Ulster wing also made more clean breaks (11), one clear of England’s Jonny May, the player he marked at Twickenham last Saturday and Welsh flyer Steff Evans.

As the graphic illustrates Ireland’s left wing, playing in his first Six Nations, was runner-up behind Hogg in the metres made category and in a tie for ninth in terms of most defenders beaten (11). Ireland fullback Rob Kearney led the way in the latter grouping with 18, two ahead of his team-mate and centre Bundee Aki.

Iain Henderson (four) was the leading Irish player in terms of turnovers won just ahead of Leavy (three) and Peter O’Mahony.

It wasn’t just the individual categories but the team collective in which Ireland set a benchmark of excellence. Schmidt’s side scored most tries (20), managed most carries (830), made most passes (1,038), won more rucks (665) and lineouts (67), racked up most metres (2,241) and scored more points (160) than any other team in the tournament.