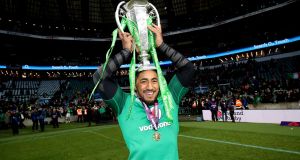 Connacht will be without a trio of Ireland internationals, including Bundee Aki, in Friday’s return to Pro14 action at the Galway Sportsground.

High-flying Edinburgh are the visitors, but Connacht will be missing Aki, Kieran Marmion and Ultan Dillane for this round 18 fixture, with Aki ruled out as he completes the return to play protocols after his HIA in Saturday’s Grand Slam winning performance.

Connacht’s assistant coach Nigel Carolan says Aki’s stock has certainly risen during this season’s Six Nations tournament having “shown how important he is to the national side”.

Yet Carolan believes the former Chiefs midfielder, who is expected to return for Connacht’s crucial European quarter-final against Gloucester, has not received sufficient recognition for this talent.

“I don’t think he gets the plaudits he deserves for working as hard as he does - it is usually the Stockdales who capitalise on the back of the work guys do before that.

“When you look at player ratings, he didn’t score as high as others, but he’s not the guy who looks for the gloss. He makes others look good. He had his line break against England, but he made CJ Stander look good because of the way he finished off that pass. The work he is doing off the ball, his ability to organise, his impact at the breakdown, his work in defence, a lot of it is unseen work, and I think it goes unappreciated at times.”

Connacht have already anticipated Aki’s increasing unavailability to Connacht next season due to national commitments and have recruited Brumbies’ back Kyle Godwin. The Zimbabwean-born centre has made 66 Super Rugby appearances, having made his name with the Western Force before moving to Canberra in 2016. Crucially, despite being capped by Australia, he is exempt from the restrictions placed on the number of Australians or New Zealanders permitted in European squads.

“I think the IRFU will mange Bundee more carefully and monitor his minutes, and we have to ensure adequate quality cover in his absence next season. We are very happy with Tom Farrell and Eoin Griffin, and with Craig Ronaldson who can play at 12 and Peter Robb, there is still quality there, but it is to ensure we are not dropping too far down the depth chart in his absence.”

Godwin, who will join former Brumbie openside Jarrad Butler at the Sportsground, can play both inside and outside centre, in addition to fullback.

“He’s a different type of player to Bundee, who is very direct, physical and quite confrontational, which has its advantages, while Kyle, who has played right across the backline, has a wider skill set - more a ball player, a distributing centre with really good feet, and I think they will complement each other.”

The only international available for Friday’s fixture is Quinn Roux, who will rejoin training today having requested to be made available.

“This week is about refocusing the minds and the bodies to finish out the season really strongly,” says Carolan. “There is a lot at stake in the league - we have a bit of work to do there - and a big game against Gloucester, so there are a lot of games coming up which will have a major impact on our season.”

Connacht now trail fourth-place Cardiff in Conference A by nine points, and are looking to find the form that saw them overcome Benetton in Treviso and nearly pulled off a huge coup against the Cheetahs in South Africa.

“We are taking every game as a must-win, but more importantly our last home game was against Zebre and we were bitterly disappointed. We let ourselves down, our organisation, and our fans. We had a good home record, and hadn’t lost here since September, but we underperformed and that was the most disappointing aspect. We dogged it out in Treviso and the guys were stellar in South Africa against the odds, and they fronted up which we expect. This is a big game for us and we are not taking it lightly.”